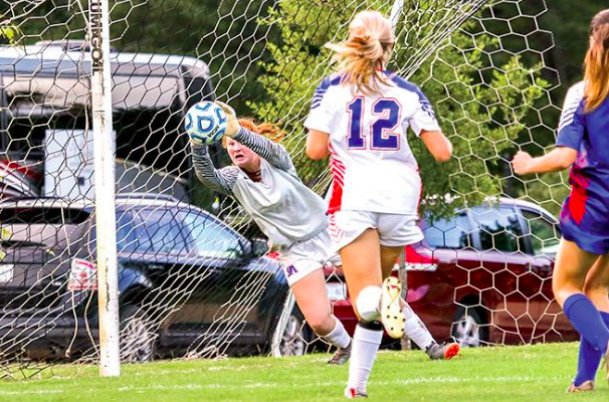 Starkville Academy goalkeeper Meri Laci Archer is one of two graduates whom the Volunteers will miss this season. Archer and Anna Card will both be playing for Meridian Community College this year, and the Vols will try to fill their spots with younger players on the rise. Photo by: Chris McDill/Dispatch file photo

Starkville Academy soccer coach John Morgan said the principal objective for the Volunteers' girls team hasn't changed from last fall to this one.

"I think our goal is to make it to the playoffs, and let's see where the chips fall," Morgan told The Dispatch on Friday.

That mentality worked out pretty well for the Vols last year, as they upset Pillow Academy on the road in the first round in Greenwood before losing to Lamar School in the following game.

Now, Morgan said he expects the Vols to repeat their success when their season starts in just over a month with a July 31 home match against St. Aloysius.

He said Starkville Academy is solid all around, particularly thanks to his defenders' confidence in shadowing opponents one on one.

"The girls are confident in what they possess," Morgan said. "We'll just have to see how the season plays out for us."

The Vols' senior leaders, twin sisters Kaitlyn and Lauren Bock, will be "hybrids" at their coach's disposal all over the field.

"They really propel us to good spots and really make us confident in what we can do," Morgan said. "They can literally go anywhere on the field, and you know they're going to make a difference."

Starkville Academy lost two major difference-makers to graduation, though, as Anna Card and Meri Laci Archer will join forces on the pitch for Meridian Community College. Card started out at right back but displayed excellence everywhere else when called upon, and Archer was a reliable starting goalkeeper for the Vols.

"You've got so much experience in both of those girls, and when they leave, there is a hole," he said.

He said it's up to him and the Vols' coaching staff to fill the holes Card and Archer left, and he already has players with designs on doing that.

And incoming seventh grader Betsy Gray Barrett is ready to fly around the field for the Vols come the start of the season.

"She's quick. She's fast. She sees the field really well," Morgan said. "She's going to be a focal point for us."

Overall, Morgan said, his team seems to be in a strong position halfway between the start of workouts and the beginning of the regular season, and he's glad to see it.

"We certainly have things we want to clean up like taking advantage of aerial opportunities, but overall, the young girls are stepping up; the girls are learning fast," he said. "It's just a matter of getting them the necessary game experience to solidify everything."

Starkville Academy will be finding that game experience against a variety of talented opponents this year, something Morgan hoped for to break up the routine of playing the same teams.

While the team scrapped plans to play in the Rivals Soccer Tournament in mid-September in Memphis, the Vols will host Northpoint Christian out of Southaven on Aug. 15 and participate in a tournament in Brookhaven on Aug. 22.

"We're trying to do the best we can to get our girls somebody new," Morgan said. "I know that they probably get tired of playing the Pillows and the Washingtons and everybody else year after year after year."

Morgan has also loaded the early portion of the schedule with difficult games so his team can adjust prior to district play. Last season's opener against Jackson Academy was quickly followed by a district contest with Lamar, not allowing the Vols much time to fix what ailed them.

This fall, Starkville Academy will play six matches -- including competitions with St. Aloysius, Northpoint and Columbus Christian Academy -- prior to its Aug. 20 district opener at rival Heritage Academy.

"The big thing that we're looking for there is good competition but also allowing us to kind of experiment and kind of find things that we need to improve on or fix before we play district," Morgan said.

Of course, the coach knows the Vols' whole regular season is subject to change because of the coronavirus pandemic. While the team has been doing its best to stay socially distanced during workouts and hopes to compete this fall, Morgan knows nothing is for sure.

"Everybody's just kind of been crossing their fingers and hoping for the best, and I think we're kind of the same way," he said. "We're preparing as if it's going to happen. We really hope it does."