'The recruiting base here is hard to resist': How Mike Leach will attack recruiting at Mississippi State 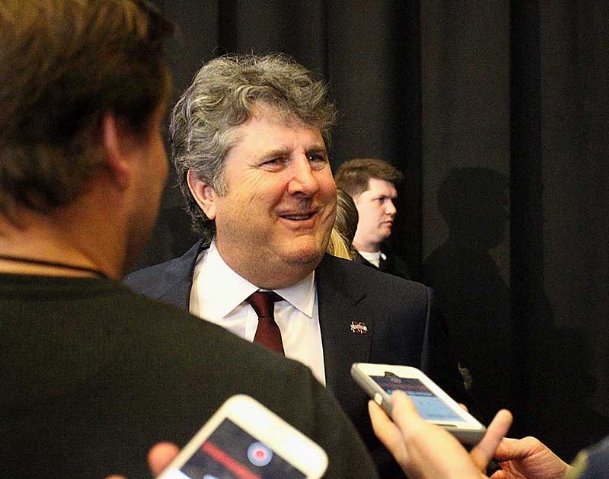 Mike Leach meets with the media to answer additional questions after the press conference introducing him as the 34th head football coach at Mississippi State on Friday in Starkville. Photo by: Jim Lytle/Dispatch file photo

STARKVILLE -- The Pirate has arrived.

Following Friday's introductory press conference -- an over 35-minute session of laughs, offensive philosophies, and more laughs -- Mike Leach has already made his mark on the MSU football program.

But with the opening pleasantries that come with a new coaching hire behind him, Leach's immediate responsibilities involve filling out his coaching staff -- something athletic director John Cohen has afforded him $4.7 million to do. But perhaps as pressing, it's nearly time to turn the recruiting calendar toward the 2021 class.

For all the excitement Leach's arrival has brought over the past four days -- including the hopes of a high-flying passing attack led by quarterback Garrett Shrader, who was among the players that met the new head coach at George M. Bryan Airport Thursday -- it remains to be seen how the former Washington State head coach will recruit in Starkville.

Speaking before a crowd of roughly 500 fans at the Leo Seal Jr. Football Complex Friday, Leach made note of how the recruiting base in Mississippi and the surrounding states was a major pull for the job.

"I've always wanted a quality place where people are committed to winning," he said. "Just to be perfectly honest, the recruiting base here is hard to resist. A 300-mile radius of here just has outstanding recruits, and it all starts with the commitment on the high school level and the great job the high school coaches do here."

Further, only the 2018 class at Washington State included multiple four-star recruits (2), while the Cougars never signed three or more such prospects in a single year over that same span.

Conversely, Joe Moorhead signed three-straight top-25 classes during his two-plus year run at MSU -- including the 22 recruits in the class of 2020 that inked with MSU during the Early Signing Period in December.

And while Leach has had limited recruiting success in the rankings, Mississippi's fertile recruiting ground should provide a natural boost.

"They've done a fine job recruiting here over the years," Leach said. "There's a lot of things we're going to have to maintain and continue and then elevate as we see opportunities."

Beyond the high school ranks, Mississippi also provides the added bonus of some of the nation's highest rated junior college recruits -- something Leach has already reaped the benefits of in the form of current Jacksonville Jaguar and former Northwest Mississippi Community College and Washington St. quarterback Gardner Minshew.

With Leach now focused on filling out his staff, he said Friday he expects to bring in recruiters familiar with the state and MSU's recruiting footprint. Once on board, those staffers should quickly turn their attention to the 2021 class and the final few spots of the 2020 group. And though the 2021 class remains roughly a year from signing on to Leach's squad, the new head coach is excited for his new staff to take advantage of the recruiting profile MSU affords.

"First and foremost, I want good, quality people who are dedicated recruiters and then a mixture," Leach said of what he'll look for in his recruiting staff. "We've got to have really strong guys who know X's and O's on the field, discipline, focus, and pulls the unit together. The most important thing is what you can do together."

4. EMCC opts out of fall football season because of virus COLLEGE SPORTS