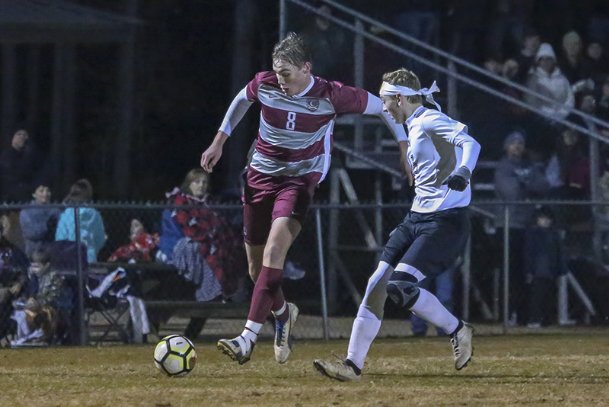 New Hope held a 2-1 lead with 10 minutes to go, but Pontotoc equalized, sending the match into overtime. The Warriors scored a goal in each overtime period, winning 4-2 and sending the Trojans home wondering what could have been.

"We knew that we had that game, and we just gave it away at the end," New Hope coach Andrew Olsen said. "It kind of motivated everybody. We had a point to prove."

The Trojans still have two weeks until their regular season ends, but so far, consider that point proven. New Hope is 10-1-1 and can win a district championship for the first time in Olsen's four-year tenure if it beats Columbus and Grenada this week.

Senior Hays Lumsden credited New Hope's strenuous summer workouts for increasing the Trojans' efforts this season. Trying to motivate and prepare the Trojans, Olsen pushed his team further than ever in the summer, running his players around town and having them run bleacher drills.

"We were complaining, but he didn't really care," senior Hays Lumsden said. "Thankfully he did that, because we're way better now."

The Trojans' offensive attack, led by strikers Trey Parnell and Jacob Wilson, has come together nicely. New Hope has scored a whopping 32 goals in its past three matches -- blowout wins over West Point (twice) and Columbus.

"With them, they spent a lot of time over the summer just working, getting comfortable with each other," Olsen said of his duo of dynamic scorers. "They build each other up. Of course, they want the goals, but they also want to help the other one out. I think that's when they're successful is when they're not them just trying to score by themself, they're trying to help the other guy out, and they both want to be up there together."

Parnell and Wilson spent plenty of time this summer improving their chemistry, and it has paid off: The two lead the state in scoring, Parnell said.

"We feel like we're the two best strikers in the state right now, and that's the mindset you're supposed to have," Parnell said. "Last year, we didn't click like we should have, and I feel like this year we worked harder to click and get where we are."

It's not just on offense where New Hope has excelled en route to a 4-0 district record. Junior goalkeeper Vicente Lugo, in his second year with the Trojans after transferring from Columbus, has given a solid performance all season. Thanks to Lugo and stellar defense, New Hope has allowed just one goal in its past five matches, all victories.

"You know when he's in the goal you're comfortable with him back there and that a lot of times he's gonna make the right decision," Olsen said. "They're gonna have to get a good opportunity on him to slip it past him. ... Some of the saves he makes, even the guys on the team, they do a double take. You don't know how he just saved that one, but somehow he gets there."

Riding that five-game win streak, the Trojans will have their final two district matches this week, playing at Columbus on Tuesday and at Grenada on Friday. Win both, and New Hope will be guaranteed a district championship.

"We've always won games, but we've always slipped up the first district game of the year," Olsen said. "This year, we have that experience, and it's more along the lines of we've been kind of in control. We control our own destiny going in. ... Hopefully we can keep it rolling and go in next week and get two wins that we need."

If the Trojans can do that, they'll once again enter the playoffs with high hopes. But that was true last season, Lumsden said, when the "heartbreaking" loss at Pontotoc left the team stunned -- and motivated.

This year, he thinks New Hope has the drive and experience it needs to jump that hurdle.

"Obviously we're gonna play some tough competition, and we're gonna have to play really hard, but I think if we can play as a unit like we've been doing, we've got a pretty good shot at it," Lumsden said.