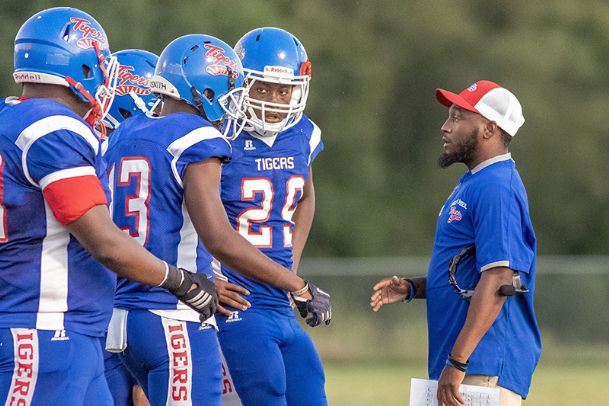 Head coach Teddy Young and the Noxubee County defense have a tall task in front of them Friday against Brandon Harris and West Pointâs explosive offense. Photo by: Chris McDill/Dispatch file photo

MACON -- Where will Friday night's game between Noxubee County and West Point ultimately be decided?

"It's gonna be won in the trenches, most likely," Noxubee County senior quarterback Marlon Windham said.

"It's gonna be won in the trenches," junior running back Damien Verdell said.

Yes, there's plenty of agreement among the 3-1 Tigers, and it starts at the top.

"If we can win in the trenches, I think we're gonna have a big chance of winning the game," head coach Teddy Young said.

Young and Noxubee County clearly know what it will take to beat a talented, disciplined Green Wave team that boasts two straight wins against Class 6A schools.

Sure, it'll take a quick start, something the Tigers were sorely lacking in last week's 23-22 loss to Class 2A Philadelphia.

But the game's most pivotal matchup is on the offensive and defensive lines, the metaphorical trenches to which the Tigers are alluding. Win there, Young has told his team, and you can pull off another upset win behind your home crowd.

"If we can block them up front," Young said, "I like our chances."

That physical play has been a big key to Noxubee County's early success. The Tigers' D-line, led by junior Travorus Hatcher, was the driving force behind consecutive shutouts of Louisville and Columbus to open the season.

But Noxubee County's defense faces a far bigger test in the 3-1 Green Wave, which has averaged a cool 35 points per game against tough competition. Senior Brandon Harris, who scored five touchdowns in a win over Starkville, will lead the West Point rushing attack.

"He's a tough kid," Young said. "Multiple people gotta come to the ball to tackle him. One person can't get the job done. We've gotta depend on all 11."

Young knows his team can't afford to make the mistakes of last week's game -- errors that led to a 14-0 lead and ultimately the Tigers' first loss of the season.

If Noxubee County can get an early jump-start from an offense that's shown improvement since its two-point performance against Louisville -- though the Tigers still got the victory -- it could give the defense a chance to bear down.

But that's a big if against a West Point defense that allowed just seven points to Tupelo last week, and Young knows it.

Despite the tough opponent, Young said his players are up to the challenge, and playing at home, he thinks Noxubee County has a good shot.

So do his players.

"We feel like we're gonna come together as a team, and we're gonna do what we gotta do," Verdell said.

Windham summed it up more concisely.

1. Analysis: Who could replace Vic Schaefer as the next women's basketball coach at Mississippi State? COLLEGE SPORTS