Depleted Mississippi State running backs room is cause for concern 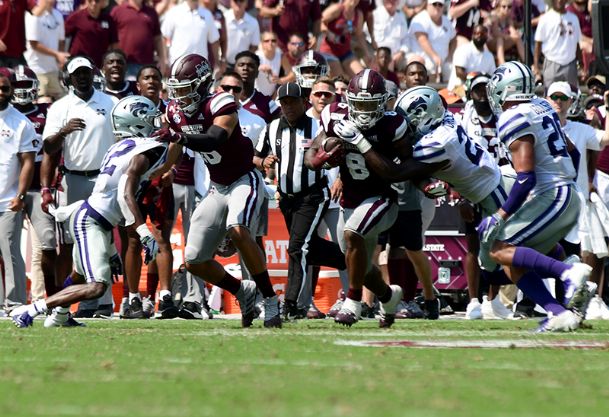 Kylin Hill has been one of the better running backs in the SEC, but behind the oft-injured back, Mississippi State has lacked depth at the position so far this season. Photo by: Jennifer Mosbrucker/Dispatch Staff

STARKVILLE -- As Malik Dear trotted out into the Mississippi State backfield during Saturday's 31-24 loss to Kansas State, the larger message was clear -- MSU has a running backs problem.

A tailback by trade at Murrah High School in Jackson, Dear has taken plenty of handoffs, but those opportunities have been limited in his time in Starkville. A four-star athlete out of high school, Dear has moved from running back to receiver to kick returner to virtually any kind of play-making position.

Yet his appearance in the backfield Saturday was not so much an indictment of his playmaking ability but an act of desperation by an MSU coaching staff that is running desperately short on running backs.

Entering the year, junior Kylin Hill earned wide acclaim as one of the SEC's top ball carriers. Through three games he's lived up to the hype. Hill currently ranks No. 3 in rush yards nationally and sits No. 5 in the country in all-purpose yards after opening the season with three straight 100-yard contests.

But as has become the seemingly annual question mark surrounding Hill, injuries are a concern. A nagging hamstring issue forced him from two games last season and limited his production in a number of others.

MSU received a minor scare when Hill went down just before halftime against Southern Miss in Week 2, though he returned in the second half.

Beyond the expected bumps and bruises SEC football breeds, he's remained healthy so far. That must remain the case.

More pressing is the lack of depth behind Hill. Senior Nick Gibson was expected to shoulder the load as his backup, but a lower-body injury caused him to miss the Kansas State game.

In his absence, freshman Lee Witherspoon -- who Hill likened to former All-American Georgia running back Nick Chubb -- has been steady in his place, totaling 44 yards and a touchdown on 10 attempts.

"I didn't know what to do for my celebration because I was so overwhelmed," Witherspoon quipped Tuesday of his first collegiate score against Southern Miss.

A three-star recruit out of Birmingham, Alabama, Witherspoon was relatively unheralded despite his staunch rushing numbers. After transferring to North Jackson High School his senior season, the 5-foot-10, 200-pound bruiser broke the Alabama state record with 53 rushing touchdowns during his lone year with the Chiefs.

"Certainly someone who is a very bright kid," MSU coach Joe Moorhead said. "Very athletic and has been able to step into SEC play and do a good job as a true freshman."

While Witherspoon has earned praise for his graceful yet punishing rushing style, Moorhead and the MSU coaching staff surely hoped he would be called upon in more of a backup role than he has been this season.

Further complicating the running back depth is the loss of Alec Murphy, who according to Moorhead is out for the season with an injury.

Sophomore Robert Rivers has also been noticeably absent, as he didn't dress for the Kansas State game, standing on the sideline in his jersey and street clothes.

Help could be on the way in a handful of forms. For one, Moorhead said Wednesday that Gibson is expected to play this weekend despite being a limited participant in practice the past few days. Having notched 58 yards and two touchdowns on seven attempts, he's provided a nice complement to Hill in limited action.

Junior college running back Kareem Walker could also soon be added to the fold. Walker's eligibility has been a perpetual question at Moorhead's weekly press conferences this year, but a resolution appears to be nearing. The one-time Michigan tailback is enrolled in classes at MSU and, according to Moorhead, has just one more administrative hurdle to overcome before he can play.

Yet with Walker's and Gibson's statuses still cloudy, there's a chance MSU marches into this weekend's contest against Kentucky with just two scholarship running backs -- Hill and Witherspoon -- available. For an offense that mustered just 71 second-half rushing yards against Kansas State, that's far from a winning formula.