Getting to know the Kentucky Wildcats 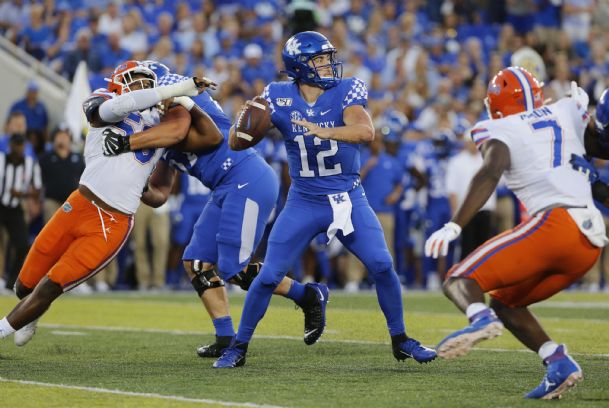 Josh Moore is in his first year covering Kentucky football for the Lexington Herald-Leader. Moore has been with the paper for 10 years and has covered high school sports before ascending to the Wildcats beat.

Moore spoke with The Commercial Dispatch about the expectations surrounding Kentucky after a strong 2018 season, the injury to quarterback Terry Wilson and more.

This interview has been edited for length and clarity.

Q: Last year, UK coach Mark Stoops led the Wildcats to a double-digit win season for just the third time in program history. I imagine that gave some new life to the fan base. Despite the loss of standouts Benny Snell Jr. and Josh Allen, was the expectation in Lexington high for the Wildcats, or did fans know regression was very possible?

A: I think expectations were high, but I don't think even the most optimistic of people were expecting them to win 10 games. Realistic fans probably expected eight or nine wins coming into this year. Looking at the schedule, it didn't seem unreasonable. A loss to Florida last week doesn't impact that in my opinion. A lot of teams on their schedule are grouped together and are similar programs in terms of where they're at, so we'll see how this year plays out.

Q: Obviously it's unfortunate that starting quarterback Terry Wilson is out for the year with a knee injury. What's been the biggest difference that you've seen in the offense since backup Sawyer Smith took over and how do you think he fared last week in a 29-21 home loss to Florida?

A: I thought with Sawyer, he can run and take off, but he's not explosive as Terry. I will say, he's stronger than Terry, though. They used Sawyer in some QB sneak situations a couple of times, whereas Terry didn't show he could get those one-yard gains when he really needed to. Sawyer has a little Brett Favre in him that he'll sometimes make decisions you wish he didn't, but he's really quick to try and make up for it immediately if he does make a mistake. Overall I don't think they lost a whole lot at that position besides game experience and a little bit of explosiveness.

Q: In your opinion, does the injury impact where Kentucky will finish in the SEC East?

A: I really don't think so. It's unusual to say, and it's definitely something you couldn't say about this program a few years ago, but when the starting quarterback went down your first reaction is actually you think they'll be fine. But Sawyer plugs in pretty well. I don't think Terry Wilson was going to be why Kentucky won games this year, but he also wasn't going to be reason they lost. Really, the offensive line is UK's most significant unit. All of the linemen are very physical up front. That allows them some leeway at quarterback.

Q: Elite pass rushers don't grow on trees, and Kentucky is forced to live in a world now where Josh Allen isn't leading the defense. How have they tried to replace his production?

A: The pass rush has actually been pretty good, and while they may not be not finishing and actually recording sacks as much, the pressure is getting to the three quarterbacks they've seen so far. I think they got a couple guys who are putting good pressure on the signal callers, and they're not Josh Allen, but I think overall they replaced that part of the defense better than people thought they would. Now, the secondary is a totally different story. They lost five guys to graduation and I think that's a huge work in progress. There's so many young guys in there. They're just going to keep putting guys in the fire and it could be a work in progress all year.

Q: Has redshirt freshman running back Kavosiey Smoke really stood out to you as a guy who's going to be the lead running back going forward for Kentucky?

A: He's terrific. He's my favorite of the three backs they run out there. He's so fun to watch. A conversation fans have had here this week is for him to start over primary starter Asim Rose, but those guys have had an even distribution of carries so far. They really wanted to get both backs more carries in the backfield and Asim has been better in pass protection. I'd bet you'll see a lot of both of those guys Saturday.

Q: Assuming Mississippi State doesn't commit 100 yards worth of penalties like the Bulldogs did last year, what do you think the key to a Kentucky win will be?

A: Not letting the Florida loss carry into this weekend. I have to think this game being on the road helps because it's something else to key in on. It's arguably the loudest environment in the SEC. You have to focus about handling the long road trip and the cowbells and that forces you to stop thinking about Florida. They really went toe-to-toe with Florida, you could have thought it was two top 10 teams going at each other instead of one top 10 team and an unranked team. Now, this is a big week for both teams involved to prove that can be in that second tier in the SEC.

3. MSU women fall to No. 18 Kentucky in Lexington COLLEGE SPORTS