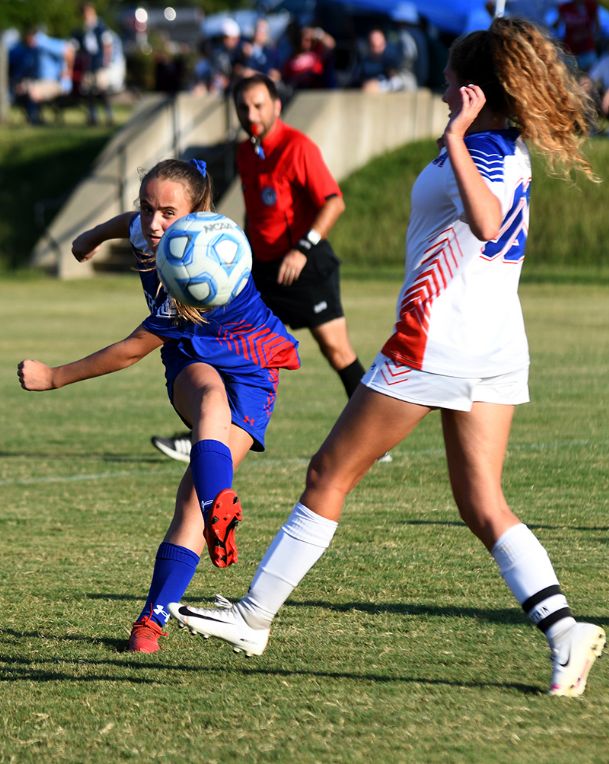 Starkville Academy soccer coach John Morgan gathered his players around him right before Tuesday's match against Heritage Academy and made one thing clear.

Well before the match started, Patriots fans and Volunteers fans alike filled a whole sideline at the Columbus Soccer Complex for the rivalry matchup, bringing chairs and pennants and cooking hot dogs on the grill. They comprised an audience the visiting Vols were happy to see, Morgan said -- it showed they'd earned the respect they wanted.

The Vols lived up to Morgan's challenge, refusing to let the packed house faze them. Instead, they went on the offensive by outworking, outstripping and outscoring the Patriots. Kaitlyn and Lauren Bock each scored in the first half for Starkville Academy (5-4, 4-1 district), and that was more than enough in a 2-0 win in which the Patriots (5-4, 1-2) never really threatened offensively.

"We knew we had to come out early and attack them early to try and silence that crowd," Morgan said. "The girls did a good job of that. They answered the call, the challenge we had set for us."

Starkville Academy was nearly always the aggressor Tuesday, spending a ton of time around the Patriots' goal, and it paid off twice in critical moments.

In the sixth minute, Kaitlyn Bock cut back and curled a shot from the right side into the lower left corner of the goal to put the Vols on the scoreboard first.

Her twin Lauren upstaged her in the 35th minute, unleashing a shot from what she and Morgan estimated was a distance of 22 yards away. The ball knuckled over the head of goalkeeper Haven Tuggle and landed behind her in the right side of the goal.

But even though Tuggle was beaten twice, Heritage Academy coach Tom Velek said, she's not to blame for the tallies.

"What I always remind her is, 'Every shot on you means 10 other people on the field didn't do their job,'" Velek said.

On the Vols' second goal, the Patriots' defense gave Lauren Bock all the time she needed to set up for the shot.

"There was no pressure on her," Velek said. "When you give them three, four, five, six, seven seconds to tee up a shot, it's gonna probably be a pretty good shot."

Allowing uncontested shots was perhaps not even the biggest problem the Patriots faced Tuesday. Their offensive attack was nowhere to be found -- even Starkville Academy's players could tell that.

She said she thought the Patriots came out looking to improve on a 1-0 loss to the Volunteers in Starkville on Aug. 22.

Meanwhile, the Vols were able to improve from a sloppy game of their own, an 1-0 loss to Washington on Thursday.

"We were more focused this game than we were last game," Kaitlyn Bock said. "We were more mentally prepared."

Whatever mental preparation the Volunteers had definitely showed itself on the field: The Vols simply looked much faster, running circles around the Patriots all match long.

For Morgan, that goes back to the training program the Vols started in early June.

Dominate, the Volunteers did. They rarely let any balls through in the middle of the field, forcing the Patriots to the outside, where Velek said his team was far too content to stay.

"A good defense will let you have the entire edge," Velek said. "Fine, run yourself into the corner, what do I care? I don't want you in the center of the field."

Whenever the Patriots did get to the center and manage a rare shot on target, Starkville Academy goalkeeper Meri Laci Archer quickly snatched it up and fired it back downfield for the attack to begin anew.

It was the final piece of the complete team effort from the Vols that led them to the dominant road win in a critical district contest Morgan called "the one that really matters."

It was a win that merited the respect the Vols wanted in front of a big crowd.

"You want to have the people who care about you and want to come out and watch you and support," Morgan said. "I think the girls have earned that."