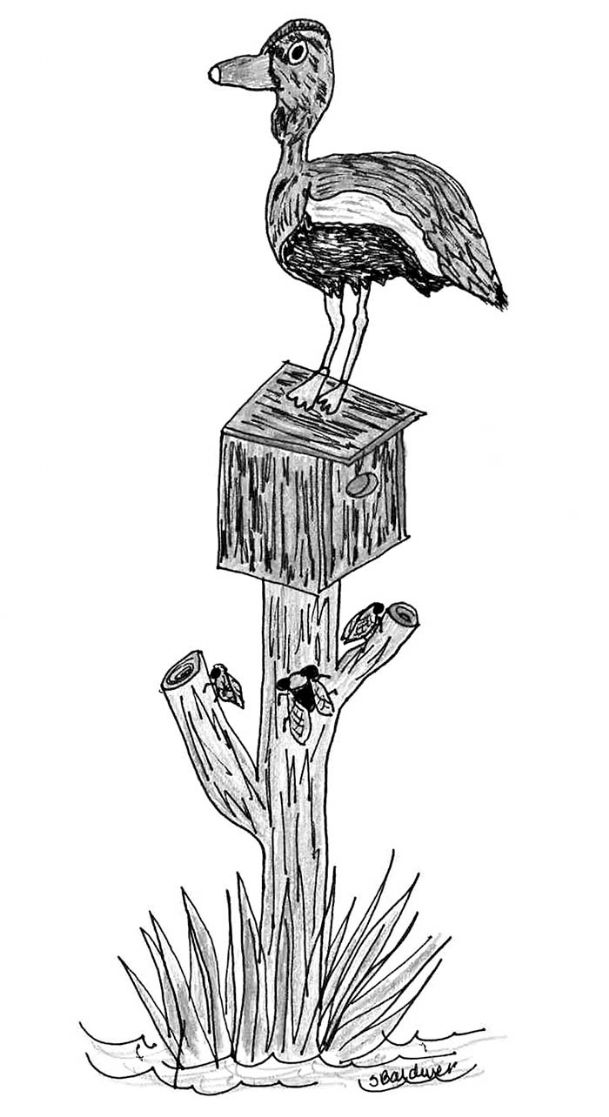 Sounds from the back porch grew louder by such infinitesimal amounts I barely noticed. It was not until I found three cicadas lying just outside the screen door. Two had expired and one was struggling while lying on his back. I tried to right him several times to no avail. Finally, I picked the three up and left them on the porch railing thinking perhaps the third one would eventually sit upright. The next day they were gone. About then I realized the growing sound had been cicadas emerging from the ground. The little fellows left almost as soon as they had arrived. Adult cicadas only live a few months; most of the life cycle of the cicada is lived under ground. The female lays her eggs in tree branches. When the nymph falls to the ground it buries itself in the soil and feeds on the roots of the trees. In 2,5, or 17 years depending on the species the cicadas emerge. There are about 2,500 different species across the globe.

The most common cicada in the Southeast is known as the "Dog Day" cicada. You have to wonder if it has anything to do with these dog days of summer. The ever-loudening drone I heard was the male calling to the females. It's his mating song.

Cicadas do not bite or sting but if you hold on to them long enough, they may try to feed on your arm. During the cicadas' short lives, they feed on tree sap. Cicadas are often confused with locust. About every 2 to 5 years I have to remind myself the green bugs with the big eyes and clear wings are cicadas. Cicadas do not swarm or eat crops like the locust. A locust actually looks more like a grasshopper.

On another note, I spied a black-bellied whistling duck. The black-bellied whistling duck is a rather rare bird to see though they are showing up more and more in our area. Our black-bellied whistling duck flew right into the wood duck box with no hesitation. The bird is not a small bird; you have to wonder if he can turn around in such a small space. The next day he stood on top of the box. Two days later he stood along the lake's edge half way between me and the duck box. He watched as I fed the Pekin ducks but didn't come near. The BBW duck mates for life but I only saw the one, unless of course I only saw one at a time. It's a beautiful bird but a bit odd looking. The legs are long and both legs and bill are a bright pink-orange. The head, breast, and back are shades of brown. The opposite edges of the wings are white, while the belly and the tip of the tail are black of course. They feed at night in the fields and water's edge. They only nest for a couple of weeks and then like the cicadas they are gone.