Partial to Home: In the fullness of August 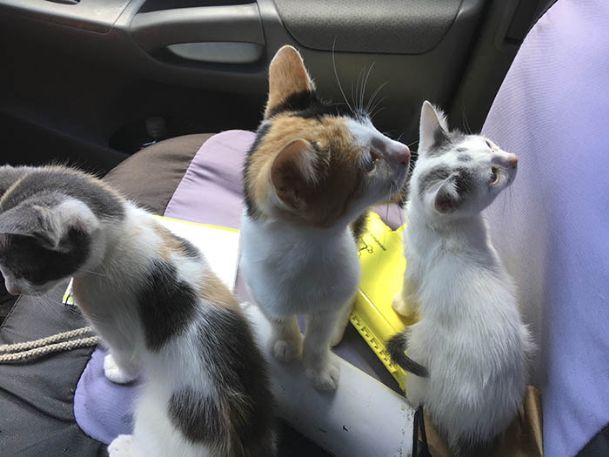 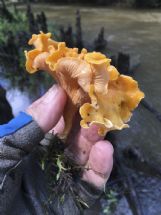 If you are driving down Jemison Mill Road near Steens and happen see three abandoned kittens emerge from a hollow tree like a scene from a fairy tale and you turn around for a second look, you might as well clear off the front seat to make way for additional passengers.

Once you take on those additional passengers and you're lucky enough to have small grandchildren, let 'em know. Chances are they'll want in, and chances are, if they're anything like ours, they'll know a lot more about pet rescue than you will.

And, if said cats are covered with fleas, a bath in a light dilution of dawn dishwashing soap will take care of them. This is a two-person operation: one to hold the kitten's four feet and one to apply the suds. Beware of gnashing teeth.

On the front seat prior to three bewildered kittens was a ziplok bag full of orange mushrooms -- chanterelles -- I had collected during a just-completed kayak run on Yellow Creek.

If you have a taste for these peppery, earthy fungi and want to buy them on line, expect to spend somewhere between $100 and $225 a pound.

Better yet you can seek out the gregarious James Morgan at the Saturday morning Hitching Lot Farmers' Market. Morgan works with retired radiologist Charles Dalke, a self-styled arborist, who grafts fruit trees in his ongoing quest to find the best pears, persimmons, figs, muscadines and peaches.

On a recent Saturday morning at the market, Morgan was selling Asian pears, eatable squash blossoms and, of course the golden chanterelle, about which he ascribes near mystical powers.

When asked about his mushroom foraging, Morgan is understandably vague. "They just be in the world," he says. "You got a million people looking for 'em.

"They grow up all under your feet," he said. "God put 'em here for man. They don't make you hallucinate they don't do anything but clean out your body."

A friend calls mid-morning and begins reading from what he says is the beginning of Chapter 20: "Now the final copper light of afternoon fades; now the street beyond the low maples and the low signboard is prepared and empty, framed by the study window like a stage."

The friend wants to know if I know where it came from. I have no idea. Faulkner's "Light in August," he says. "Pay attention to the light, the yellow light that you only see in August," he instructs me. I assure him I will.

Later that same afternoon on a bike ride on the loop around Rosedale, I notice a landscape bathed in that yellow light.

There is a melancholy to August. The end of yet another summer is within sight. Soon the pace of life quickens again. School starts. Football and soccer seasons begin. The succession of holidays will quick be upon us. Savor the relaxed aimlessness, the lushness of gardens going to seed; the homegrown offerings of farmers' markets. In no time the summer of '19 will be a memory.

When someone disparages Columbus, I come to the defense of my hometown saying there are unsung people doing good, if not remarkable things out of the public eye. Beverly Norris was one of those people.

As program director of the Columbus Arts Council, Bev booked musicians and storytellers who likely would not have given Columbus a second thought were it not for Bev's kindness, enthusiasm and ability to make visiting performers feel like royalty.

That kindness and devotion wasn't limited to visiting performers. Beverly was that way to everyone, friends, patrons of the Arts Council, strangers who walked in off the street. She had that enviable ability to give you her all, regardless who you were.

I can remember more than once being at one of Bev's events and thinking, "This performance on this night is as good as anything you're going to see anywhere." That's not hyperbole. If you were in the audience, you know.

Beverly Norris died Friday morning after a long illness, and if you knew her, your heart aches.

Birney Imes III is the immediate past publisher of The Dispatch.