Possumhaw: Way back when 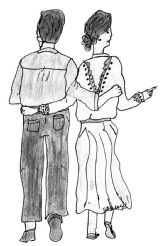 Each day I miss you more and more ... remember darling I'm waiting for you...

Ten Million Kisses by Billy Thorburn's The Organ, the Dance Band, and Me- 1941

R.C. White's book "Ten Million Kisses" turned over in my hands. If ever a cover attracted my attention this one did. A handsome soldier embraces his girl. The cover is done in deep sepia like photographs stored in boxes and albums from my mom and dad of the same era. The book is riveting and it is a true story-my favorite kind.

Reading of Les and Lois's lives made me wish I had asked more questions of my parents while I could. I wondered what it was like to be a freshman at the University of Alabama in the fall of 1939.

Lois Cochran was a small-town girl from Alabama going to a nearby college. Les Frawley was a Yankee from Trenton, New Jersey, planning to major in Aeronautical Engineering. They met at their first fraternity party. Each had big plans for their own futures.

"Airplanes were nothing unusual in the skies of New Jersey, Les's home. He had spent hours watching them fly over his house and dreaming of a time when he, too, would fly such a magnificent machine. At the same time, a little girl in the mining town of Parrish, Alabama, dreamed of becoming, a doctor to help those most in need. In 1939, their meeting began a love story that represents an entire generation engulfed by the war that would change our world forever."

It was December 7, 1941 and Les had escorted Lois to church services. They had already heard rumors. At the end of the service the minister reported, "'Brothers and sisters, we have probably all heard by now the terrible news.' He gripped the podium and continued, 'Early this morning, our Navy Base at Pearl Harbor sustained a heavy attack from Japanese forces. It seems that their air strike has destroyed some of our ships harbored there, along with many planes. American causalities are high. This unprovoked attack came as a complete surprise, and precautions are now being taken to secure the rest of our country."

The wartime narrative unfolds from a first-person perspective, eye witness accountings of two very real people's lives in a time that most of us can't even imagine. From days of big band dancing to long separations, hardships, and little communication. "During this time, Lois received a few letters from unnamed places..."

As remarkable as the story is, the way the book came to be is almost more so. R.C. White was introduced to the story by Fred Frawley, son of Lois and Les. Boxes upon boxes of memorabilia, journals, photographs, and letters between the couple had been preserved. For four years R.C. poured over the documents, researched extensively, and conducted interviews with the four Frawley siblings. The result is an astonishing, well-written story both heartwarming and heartbreaking.