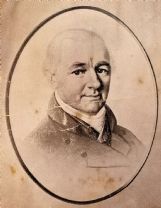 Capt. John Daves was one of the "Forlorn Hope" of the Battle of Stony Point in 1779. In the battle Gen. "Mad" Anthony Wayne's Corps of Light Infantry fixed bayonets and charged a British fort with unloaded muskets. Daves was the great-grandfather of Sallie Govan Billups, who lived at Snowdoun in Columbus
Photo by: Courtesy photo 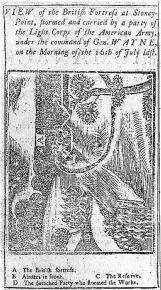 A wood-cut of the Battle of Stony Point published in Boston in 1780. It is captioned "view of the British fortress at Stoney-Point, stormed and carried by a party of the light corps of the American army, under the command of Gen. Wayne, on the morning of the 16th of July last (1779)."
Photo by: Courtesy photo/Library of Congress Rare Book and Special Collections Division

Writing my column last week on the Washington medallion passed down through Sallie Govan Billups, I told of the Revolutionary War record of John Daves, her great-grandfather. The fact he had been seriously wounded at the Battle of Stony Point in 1779 was repeatedly mentioned in the old records. It seemed there was something more to that story and digging into it I found there was a lot more. It was a story of the military genius and daring of Washington and "Mad" Anthony Wayne combined with luck and the almost unbelievable bravery of the Continental Army's Corps of Light Infantry.

I had heard of the Battle of Stony Point, where the Continental Army under Washington and Wayne captured a British fort on the Hudson River above New York, but I knew little else about it. What I found out was it was a most impressive and amazing victory.

General Wayne's 1,300-man Corps of Light Infantry charged a well defended British fort at midnight with fixed bayonets and, except for a small diversionary force, unloaded muskets. They captured the fort and took 472 British soldiers prisoner after only a half-hour of fighting. However, the battle was of much greater psychological importance than military importance. The victory earned the Continental Army respect and gave it increased confidence.

The plan formulated by Washington and Wayne to take Stony Point was masterful, daring and extremely risky. Earlier in the spring of 1779, the British had taken Stony Point from a small American force and fortified it. It was a commanding rocky prominence sticking out into the Hudson River and surrounded by water or marshes making it at high tide appear almost as an island. The British fort was of earthworks protected by abatis, which is a defensive obstacle of trees cut and laid on the earthwork having the limbs pointed outward after being cut and sharpened. The fort was manned by about 525 veteran British soldiers, 15 pieces of artillery and protected by two Royal Navy gunboats in the Hudson River.

The American plan was for a two-pronged assault at midnight on the fort's north and south flanks with a small diversionary attack in the center. What was especially daring was that the two main assaults would be with fixed bayonets and unloaded muskets. Only the diversion would be firing at the British. The plan was to draw the British into thinking the only real assault was in the center. Each flanking attack would have a forlorn hope of 20 men to advance in front of the assault and open a routed through the abatis defense network into the fort. The term "forlorn hope" referred to the mission of those 20 men being of great importance but so perilous that the odds were against them surviving.

General Wayne's assault force was the Corps of Light Infantry. This was a temporary unit of four elite regiments selected out of all the regiments in the Continental Army. Among them were 150 North Carolina troops under Major Murfree, which included Lt. John Daves. However, Govan family records reflect that at Stony Point, Daves was not with Murfree but serving under Lt. Gibbons of Pennsylvania. Therein is the story of the Forlorn Hope.

On July 15, 1779, Gen. Wayne marched his Corps of Light Infantry 14 miles to within 1 1/2 miles of Stony Point, arriving about 8 p.m. It had been a grueling march that was often single file over rocky terrain. On arriving at the point of assembly for the attack, the troops were all issued a ration of rum and instructed to pin a piece of white paper to their hats so that they could recognize friends in the nighttime fighting. At 11:30 p.m. the assault began.

The attack was to be in two columns, one north and one south, with bayonets fixed but muskets unloaded. That was to prevent any accidental discharge that might alert British guards of the column's flanking position. In the center Major Murfree with his 150 North Carolina troops would have loaded muskets and create a diversion with a lot of firing and hollering to give the appearance of a frontal assault. In front of each of the main attacking columns would be a 150-man vanguard. In front of each vanguard would be a 20-man "forlorn hope" whose job was to cut an opening through the fort's defenses.

The two forlorn hope units were composed of selected volunteers. Lt. James Gibbons commanded the forlorn hope on the north and one of his handpicked volunteers was Lt. John Daves. Lt. George Knox commanded on the south. Both officers were from Pennsylvania and were chosen to lead as they knew the countryside. The role the two units played lived up to the meaning of their name. Passage was cut into the fort by both units. However, in Lt. Gibbons forlorn hope out of the 20 men, 17 were killed or wounded. Daves was one of those wounded with one account saying he was bayoneted by a British soldier.

The attack was a complete surprise and a success. The British fell for the diversion and reinforced the center of their line and counter attacked there. That left few soldiers at the flanks facing the main attacks and when those attacks succeeded the counter attacking British troops found themselves surrounded. It was a total victory for Gen. Wayne, who had been wounded but was carried cheering into the fort by his charging troops. A huge quantity of supplies and 472 British soldiers were captured. Most importantly the Corps of Light Infantry showed the Continental Army and the world that American soldiers could go bayonet to bayonet with veteran British troops and defeat them.

John Daves recovered from his wound, was promoted to Captain and returned to action serving until the end of the war.