Partial to Home: Camping on the Sipsey 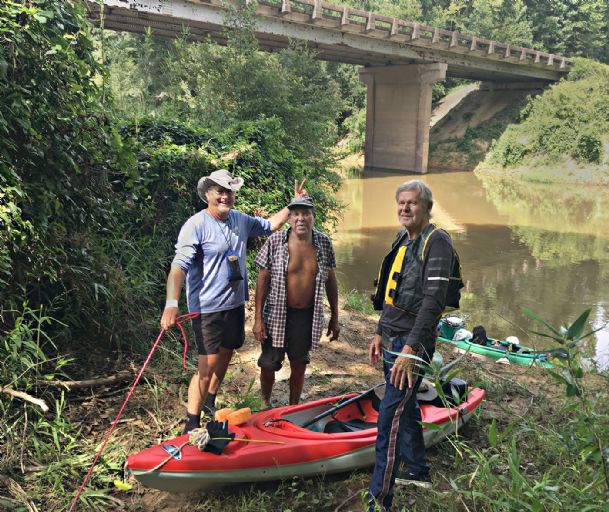 Dudley Bearden, âHDâ Taylor and Bobby Manning pause for a picture before launching their kayaks in the Sipsey River earlier this month for a one-night camping trip. Photo by: Birney Imes/Special to The Dispatch

Around 5 o'clock on a recent Wednesday afternoon I was standing in the wilds of Pickens County, Alabama, in the only whitewater rapids on the Sipsey River, with a peach in one hand and a cell phone in the other.

Before me reclining in the river was James "HD" Taylor, chairman of the Black Creek Paddling Society*. The chairman was reared back as though he were in a La-Z-Boy recliner. For a moment, the rushing water had transformed him into a mummified Pharaoh.

HD sat up and wiped the water from his face. "Life is good!"

I was trying to negotiate the rapids and take a picture of HD. Then, like my friend, I intended to sit in the river and eat the peach my neighbor Beth Brooks had given me earlier that day.

There were four of us: Bobby Manning, "HD," Dudley Bearden and myself. Dudley provided the impetus for the trip simply by declaring it was on, and we would depart at a certain hour from Hardee's in East Columbus.

There we met, and after Dudley finished his hand-scooped strawberry shake and in so many words being told we were fools by a Mr. Harkins, a patron of the restaurant, we departed shortly after 1.

We were bound for Lewiston Road, a tributary of Alabama Rt. 14 about three miles south of Aliceville. We would put in where the road crosses the Sipsey and paddle several miles to rapids at a 180-degree bend in the river where members of the group camped several weeks earlier.

Some years ago, maybe 10, maybe a 100, maybe 200, the river during flood season began taking a shortcut through a low-lying strip of land that separates the winding river. In time the water wore away the blue-rock bank, creating these rapids and an island from land it once looped around.

The water swirls past a crescent-shaped beach of sand and gravel that slopes upward to a strip of trees behind which a deer trail disappears into a dense forest. We would string our hammocks between the trees and that night build a small fire on this rise overlooking the waterfalls and the bend in the river.

After setting up camp, we swam, explored the area on foot and in kayaks. One of the group tied string to two bottles of beer to cool them in the river. I dove in above the rapids with my glasses on my head. A catfish is wearing them now, I suppose.

Note to self: bring something to sit on when camping. My compatriots had rigid plastic coolers for chairs while we dined. It's also a good idea if the group can agree on a communal dish beforehand. As it was, we ate the food we brought. No one wanted Dudley's freeze-dried lasagna from Walmart, my garlic hummus from Kroger or Bobby's albacore tuna in a foil pouch.

After dinner we lounged in our kayaks at the water's edge -- the temperature was 90 degrees at 7 p.m. -- and talked. HD fished. He was using catalpa worms he had gathered from a tree in his yard. I'd always heard of their nearly mystical power over fish the worms hold. How you can refrigerate, even freeze them and they miraculously come back to life.

(Not so says Poochie Laws, an unimpeachable source when it comes to local fishing lore. Catalpa worms will last four days in the refrigerator, but will not survive freezing, Poochie said.)

HD hauled in a small catfish. After he unhooked the fish, he spit on it and thumped its head before releasing him. "You go tell your mama I spit on you and thumped your head," he said to the fish. "Maybe she'll come looking for me."

Later, after a bit of campfire conversation, we turned in. This was my first night to sleep in a hammock. I climbed in, laid back and listened as the night came alive with its summertime cacophony of croaking frogs, katydids and cicadas.

Around 1 a.m., awakened by the almost full moon, I joined Dudley and HD around the still-glowing campfire. We stood quietly watching as the rushing water coursed through a silvery landscape.

* A friend met on the Riverwalk asked about the Black Creek Paddling Society. Said he'd read of our exploits on Facebook. The organization -- at this point, anyway -- is strictly tongue-in-cheek.

Birney Imes (birney@cdispatch.com) is the former publisher of The Dispatch.

Birney Imes III is the immediate past publisher of The Dispatch.