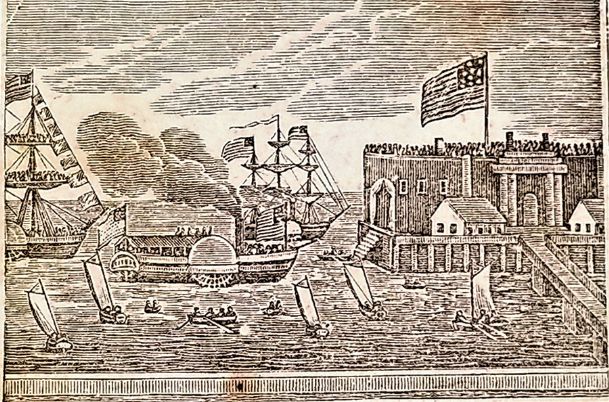 The landing of Lafayette at Castle Garden, New York, on his return to America on Aug. 16, 1824, as shown in an 1844 engraving. Photo by: Courtesy photo 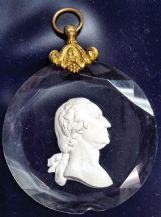 A cut-glass medallion of George Washington which was presented by Lafayette probably to Andrew and Mary Govan as a wedding present on February 28, 1825, during his return to America.
Photo by: Courtesy photo

This fall marks the 195th anniversary of the return to America of Lafayette in 1824. In Columbus there is a rare medallion presented by Lafayette on that return visit. However, as is often the case with historic relics, it is unclear as to exactly who Lafayette gave it to.

Two years ago I wrote about the medallion, but additional research has shown the old account of it was not entirely correct. At the same time the research opened a new window on its history.

The medallion is a circular cut-glass portrait plaque containing a silvered sulfide bust of George Washington. On the reverse is the inscription "Desprez, Rue des Recolets No. 2, a Paris" and Washington spelled as "Wasington." Christie's has dated cut-glass sulfide portrait plaques by Desprez as c. 1820. That date creates problems for the traditional story of the medallion.

The medallion had passed down from Sallie Daves Govan Billups to her daughter Mary Billups. The story as told by Mary in the 1939 WPA history of Lowndes County was: "Among the relics in the house (of Mary Billups)....the priceless medallion of Gen. George Washington (there are only eight in this county) presented to the great-great grandfather of Miss Mary Billups, by Lafayette, under whom he had served in the Revolutionary Army...."

The medallion was also mentioned in the 1940 Columbus Pilgrimage guidebook. The guidebook, which had been proofread by T.C. Billups, a second cousin of Mary Billups, added to the story that, of the eight original, only two survived, with the other in possession of Mrs F. Louis Mora of New York.

The problem with the stories behind both the Billups and Mora medallions is that the medallions only date to around 1820, not the 1700s. There is an explanation, though. The medallions were not presented at the end of the American Revolution but by Lafayette when he returned and traveled across America in 1824 and 1825.

Mrs. Mora's medallion also was by Desprez and was the same sulfide bust with Washington spelled without an "h." Her story appeared in several 1908 newspapers, typical of which is this account from the Bismarck Daily Tribune of Sept. 12, 1908:

"Only One Known to exist of 8 Medallions Made for Lafayette. Mrs. F. Luis Mora of this city owns a Washington relic which, so far as is known is the only one of its kind in existence. It is one of six medallions which were made to order for Gen. Lafayette. Before Lafayette took leave of the officers of his staff, says the Circle, he had these medallions made in Paris and presented them to the six officers immediately under him. The five others have disappeared and may have been destroyed.

"The one in Mrs. Mora's possession is made of cut glass bound by a heavy rim of solid gold, to which is attached a gold ring by which it may be susÂ­pended. Between the two layers of glass is a beautifully modelled head of Washington in plaster. ... The medallion came into Mrs. Mora's possession through her greatÂ­ grandfather, Lewis Compton, to whom it was presented soon after the RevoluÂ­tionary War."

Carolyn Kaye and I have done more research to determine the time of presentation. The Columbus medallion can be traced back to Sallie Daves Govan Billups, who was the great-granddaughter of Capt. John Daves, a Revolutionary War veteran, and she was also the daughter of Andrew R. Govan, a congressman from South Carolina, who knew Lafayette.

John Daves was a soldier of the 1st Continental Line of troops and quartermaster of the 2nd Regt. He was commissioned an ensign and ordered to report to Washington's forces on Sept. 30, 1776. He served at Brandywine, Germantown, Valley Forge, Eutaw Springs and Monmouth. At Stony Point he was wounded and then in 1781 was promoted to captain. He was also one of the organizers of the North Carolina Society of the Cincinnati, a society of Revolutionary War officers. Washington appointed him 1st collector of customs at New Bern, North Carolina in 1790 and inspector of surveys and ports in 1792. He died in 1805.

Lafayette and Andrew Govan knew each other and worked together in opposition to the international slave trade. The Billups-Garth Archives at the Columbus Public Library has a Photostat copy of a letter in an Arkansas museum from Lafayette to Govan dated Feb. 20, 1825, concerning the slave trade. On the December day in 1824 that Lafayette spoke to the U.S. House of Representatives, Govan was appointed to a committee to investigate the slave trade.

Govan married Mary Pugh Jones, John Daves' granddaughter, in Northampton County, North Carolina, on March 10, 1825, at the home of Mary's adoptive father, her great-uncle Eaton Pugh. Lafayette spoke at the courthouse in Northampton County on Feb. 26 or 27, 1825. At the reception there for Lafayette, an address was given by A.J. Jones, a cousin of Mary's. Afterward Lafayette then visited the home of Mrs. Willie Jones. Willie Jones was also a cousin of Mary. This occurred just 10 days before the wedding of Mary and Andrew, both of whom had a connection to Lafayette. Makes the Billups' Lafayette-Washington medallion look like a wedding present.

Of course, by next week we may have found a slightly different route for the medallion but the link is there. The Daves, Eaton, Pugh, Jones genealogy was a nightmare to work with in the late 1700s and early 1800s. There were a whole lot of cousins who got married and all seemed to like the same names. What is clear, though, is there is a link between Lafayette's Washington medallion and descendants of soldiers with whom he served or with people he was working with on important issues. That link dates to his return to America 195 years ago.