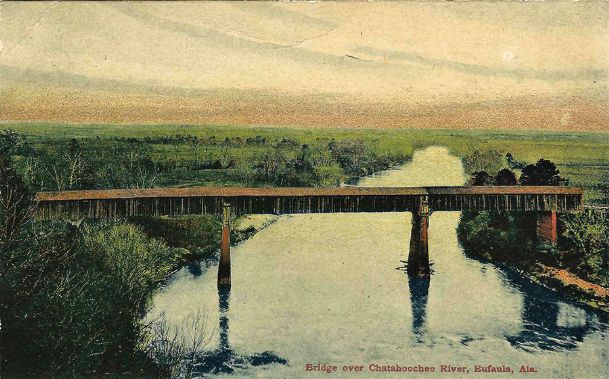 A circa 1905 view of the then still standing 1839, bridge over the Chatahoochee River at Eufaula, Alabama. The bridge had been built by enslaved architect and bridge builder Horace King. King's 1842 Columbus bridge was said to have looked like the Eufaula bridge. Photo by: Courtesy photo

It's always rewarding when research confirms an earlier educated guess.

Last week a postcard I found did just that. The late Sam Kaye, Carolyn Kaye, Gary Lancaster and myself began researching the first bridge over the Tombigbee at Columbus probably 20 years ago. The bridge was constructed by Horace King, an enslaved person who was a noted bridge builder. It was completed in 1844.

There are no known surviving original images of that bridge. To recreate it, Sam had taken an 1845 description of it, and after studying images of other bridges of the mid 1800s, he drew a hypothetical view of that first Columbus bridge. The postcard I purchased was a circa 1905 view of the then still-standing 1839 bridge over the Chattahoochee River at Eufaula, Alabama. That bridge was also built by King, and the Columbus bridge was said to have looked like it. Sam's hypothetical drawing of the bridge does actually look like the image on the postcard. It still amazes me the way Sam could take a brief description and turn it into an accurate image.

The history of that first bridge over the Tombigbee at Columbus is an interesting one. Though construction began in 1842, the bridge was not completed until 1844. It was designed and its construction was directed by King, a slave owned by Alabama and Georgia bridge builder John Goodwin. The Columbus bridge was the project of Tuscaloosa businessman Robert Jemison who had a large grist mill and sawmill operation at Steens on the Luxapalila. The building of the bridge across the Tombigbee was the first major construction project in Columbus.

In the mid 1800s, King was considered one of the best, if not the best bridge builder in the South. He earned that reputation while a slave, owned by John Goodwin, who sent King around the south building bridges. Unheard of in the antebellum South, King while a slave rode unsupervised inside stage coaches with the white passengers. He, at other times while a slave, was the sole supervisor of other slaves including transporting them across state lines and while working on the Columbus bridge even supervised white workmen. Those actions were all contrary to law and custom. However, King's association in business with Goodwin and Jemison, and his reputation as probably the best bridge builder in the South, gave him freedom of action and movement not allowed other enslaved persons.

In 1846 Goodwin and Jemison petitioned the Alabama legislature that King be emancipated in a manner that did not place on him the many restrictions placed on other free blacks in Alabama. He was emancipated by legislative act on Feb. 3, 1846. After receiving his freedom he entered into a business partnership with Goodwin, his former owner, and continued working with Jemison. King's emancipation made national news as just prior to it Goodwin had turned down the then princely sum of $15,000 in an offer to purchase King.

King's Columbus Tombigbee bridge was a wooden covered bridge that came off of the top of the river bluff at the west end of Fourth Avenue South. Its east footing is still visible as a flat earthen platform on the side of the bluff. King also built bridges over the Luxapalila and Yellow Creek, both of which survived into the 20th century. In addition he built a bridge over Catalpa Creek on the Columbus-Starkville road. A 1936 Memphis Commercial Appeal article said the Luxapalila bridge was 94 years old and was the oldest bridge still in use in Mississippi.

The only surviving description of the Columbus bridge is contained in an 1845 letter from Jemison written after the bridge was completed but before all expenses had been paid: "The length of the Bridge at Columbus (exclusive of Land Bridge of which there is about 160 to 175 ft.) is 420 ft. The height between floor & roof beams is I think 18 ft. Width inside of trusses 22 ft. from out to out 24 ft. These dimensions are given from recollection but do not materially vary from the true dimensions. It is built on four wooden piers or rather two piers & two abutments. The two piers are about 60 ft. in height one of the abutments 40 to 50 & the other not more than 20 to 25 ... cost of the bridge, it will not be less than fifteen nor more than eighteen thousand dollars." Sam used this description and his knowledge of 19th century bridges to create an amazingly accurate drawing of Horace King's Columbus Tombigbee bridge of 175 years ago.

Rufus Ward is a local historian.