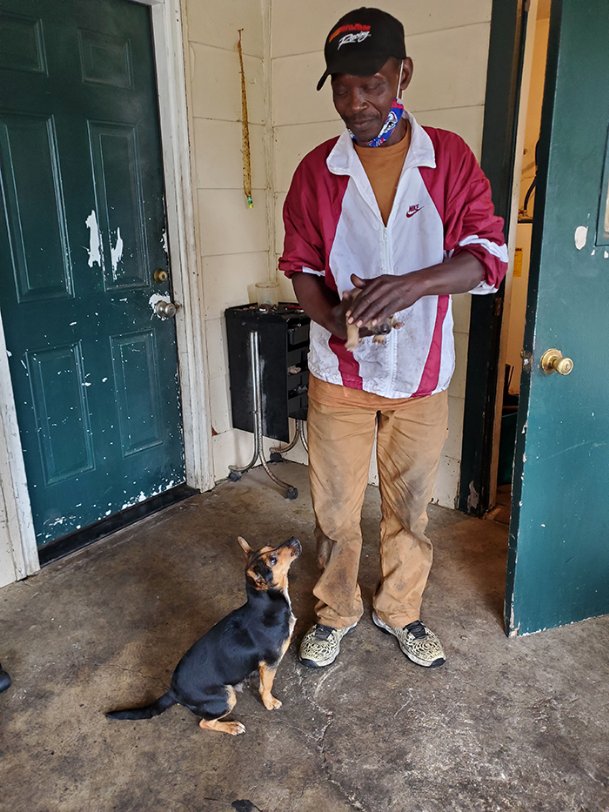 James Winder holds one of his dog Ladyâs three puppies at his house in Oktibbeha County on Thursday. He said Lady is very protective of her puppies, her second litter in four years, and will let almost no one near them. Photo by: Tess Vrbin/Dispatch Staff

Sarah Akins, left, director of the Oktibbeha County Humane Society, helps first responders extract three puppies from a culvert Wednesday before a storm. The rescuers attached a snake stick to a flagpole and nudged the animals into reach.
Photo by: Courtesy photo

Lady, Mavis Kingâs and James Winderâs dog, nurses her puppies at their home in Oktibbeha County on Thursday. Lady gave birth to the puppies in a nearby culvert two weeks ago, and county first responders spent four hours extracting them on Wednesday before a storm could flood the culvert and drown the puppies.
Photo by: Tess Vrbin/Dispatch Staff

Some days, like Wednesday, they get "kind of the exact opposite," said volunteer Laurie Grace -- puppies in a culvert.

It took the combined efforts of the Central Oktibbeha Volunteer Fire Department, the Oktibbeha County Sheriff's Office and the Oktibbeha County Humane Society to get a mother dog and her three puppies out of a culvert on Churchill Circle just west of Starkville. They completed the four-hour rescue shortly before the storm that flooded the culvert and likely would have drowned the puppies, OCSO Sgt. Brandon Griggs said.

All four dogs are now safe indoors, much to owner Mavis King's relief.

"I'm so glad they got them out of there before the rain," she said.

Oktibbeha County's seven rural volunteer fire departments receive calls to rescue animals about once every couple of months, and those rescues are usually from wells and sinkholes, Warner said.

"We have a lot of animals fall in wells because it's unexpected," he said. "There might be an old well in the pasture that nobody knows about until a small animal like a cat falls in it."

Grace said she and other Central Oktibbeha volunteer firefighters were responding to a call in the opposite end of their service area when Griggs asked for their help with the dog rescue. An electrical transformer had caught fire, and Grace said they made sure it was under control before heading to Churchill Circle.

Griggs said OCSO is usually the first agency citizens call for an animal rescue. King said she and her husband, James Winder, knew that their dog, Lady, had given birth to her puppies in the culvert near their house about two weeks ago. They had never seen the puppies before Wednesday, since Lady had been coming to the house for food a couple times a day and then retreating to the culvert to be with her babies.

When she had her first litter of puppies a few years ago, King and Winder did not get to meet them until they were six or seven weeks old and already walking, they said.

"If she doesn't know you, she won't let anybody get close to them," King said.

Lady initially belonged to a neighbor across the street who moved away about four years ago, and King and Winder said they do not know what breed of dog she is.

She is very much "the neighborhood dog," King said, since everyone in the span of two blocks knows her and feeds her.

"They try to keep her, but she always comes home," Winder said.

The dogs were huddled in what Grace called "the most inconvenient part of the culvert" -- right in the middle of it, out of any humans' reach.

They were slightly closer to the side that was harder to access, and this was likely on purpose, said Sarah Akins, director of the Oktibbeha County Humane Society.

"It's a motherly instinct," she said. "If they're going to go (into a space) from one side, they're going to put their babies on the other side, so if a predator sees them, the babies are not where they came in."

Lady had also gathered discarded cans and placed them around herself and the puppies as a sort of makeshift fence that rescuers had to clear out in order to reach them, King said.

Ultimately, Winder lured Lady out of the culvert with a bone, and the first responders attached Akins' snake stick to an extendable flagpole so they could nudge the puppies into reach, Griggs and Akins said.

The situation was Grace's first animal rescue. She has been volunteering for a few years with the Central Oktibbeha VFD after several years teaching with the Mississippi State University Extension Service.

"You never know what's going to happen, and I think it's the ingenuity that gets us through a lot of these ... unusual calls," Grace said.

Most calls involve medical emergencies, from seizures and difficulty breathing to strokes and heart attacks, Warner said. The second-most calls come from vehicle wrecks and the third from fire-related emergencies, he said.

Besides fire and rescue, the volunteer fire departments also provide non-emergency services such as building inspections and fire prevention education, he said.

Warner is the only member of the county's volunteer fire services who gets paid. He receives $1,000 per month while the rest of the firefighters work for free and on their own time. He said the departments have a shortage of firefighters at the moment and will accept anyone who is interested.

Grace said the fire services attract a wide variety of people, including students at MSU and East Mississippi Community College.

"There's something for everybody and there's always something that needs to be done," she said.