Aldermen vote to save 'at least some' trees at Garan site 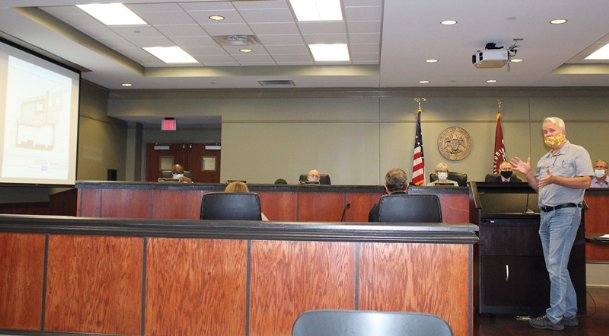 Developer Mark Castleberry, right, explains to the Starkville board of aldermen his reasons for requesting all 64 pine trees be removed from the current Garan Manufacturing site on Highway 12, where he will build a retail shopping center in the next year. The board denied his request 4-3, and Castleberry said he will adjust the site plans accordingly. Photo by: Tess Vrbin/Dispatch Staff

Everett Kennard, left, and Starkville Police Chief Mark Ballard discuss the issue of loud and unsafe traffic on East Gillespie Street, where Kennard lives, outside Starkville City Hall after Kennard's appearance before the board of aldermen on Tuesday. Traffic from Highway 12 has been diverted to Gillespie Street in the past couple years, and Kennard said he and other residents "want our street and our quiet neighborhood restored."
Photo by: Tess Vrbin/Dispatch Staff

STARKVILLE -- At least some of the 64 pine trees that have stood for decades at the intersection of Highway 12 and Industrial Park Road will be saved after aldermen voted narrowly Tuesday that they couldn't all be removed.

The 4-3 vote declined a request from developer Mark Castleberry, who plans to build a retail center at the current Garan Manufacturing site. The board instead unanimously approved Castleberry's request to install "an attractive privacy fence" lined with shrubbery on the north side of the property and to plant 75 new, smaller trees of a variety of species throughout and around the parking lot.

Sandra Sistrunk of Ward 2, Jason Walker of Ward 4, Hamp Beatty of Ward 5 and Vice Mayor Roy A. Perkins of Ward 6 voted against Castleberry's original request. Aldermen Ben Carver of Ward 1, David Little of Ward 3 and Henry Vaughn of Ward 7 voted for it.

The board's decision will save "a good number" of trees, which is "not ideally what the people who value trees in town would want, but it's something," Beatty said Tuesday.

Beatty previously told The Dispatch he wanted the development to save at least some of the trees, especially because Castleberry will use taxpayer funds via a $3 million tax-increment financing plan to build infrastructure at the site.

Variances from the city code must be approved by the appropriate board or commission and then by the board of aldermen. The landscape advisory board approved Castleberry's request 5-1 earlier this month.

Garan is scheduled to move to a new location at the North Star Industrial Park in northern Starkville, and the new development by Castleberry's company, Castle Properties, will include an ALDI grocery store.

Castleberry said the development will have a completely underground water detention system in order to comply with Starkville's stormwater ordinance. He previously told The Dispatch this means the Garan site will be completely razed and the new dirt on top of the trees' roots will eventually kill them.

The stormwater ordinance, updated in August 2019, states that developments must be able to mitigate storm-water runoff to accommodate a 100-year weather event, which is defined as a rainfall of 9.4 inches over a 24-hour period.

"(Removing the trees) also increases our ability to develop the site," Castleberry told the aldermen. "Leasable space is good for us as the developer, but it's also good for the city because it generates more opportunities for job creation and taxation."

Walker, an associate professor of landscape architecture at Mississippi State University, said he believed the trees in at least the northeast corner of the site could be saved.

"I think there's an opportunity right there to potentially look at that and not impact the value of the site that needs developing, but at the same time keep some modicum of existing vegetation," he said.

Sistrunk deferred to Walker's comments as the reason for her vote, and Perkins did not provide a reason for his.

Carver and Little said they trusted the landscape advisory board's decision to support the variance.

Castleberry told The Dispatch he did not yet know the impact of the board's decision on the plans for the development, "but it seems reasonable and we're going to try to make it work."

Everett Kennard and his wife do not let their grandchildren play near the sidewalk in front of their house on East Gillespie Street, they said, because they are concerned about the frequency of speeding cars on the street.

Kennard spoke on behalf of a small group of fellow East Gillespie Street residents during the citizen comment period. He said changes to the layout of Highway 12 over the past couple years have caused commuters to and from MSU to drive on the closest parallel street, which happens to be Gillespie Street.

The area between Jackson and Montgomery streets, in particular, is one of the oldest neighborhoods in Starkville and is designated a historic district, so residents are unhappy with the higher volume of cars that risk safety by speeding and disturb the peace with their loud engines, Kennard said.

"We've come to present our views and hopefully open a dialogue and get some help and advice," he said. "We want our street and our quiet neighborhood restored."

The speed limit on that stretch of road is 25 miles per hour, which Kennard said is already too high, but he noted he is certain vehicles pass his home traveling nearly double that speed.

City Engineer Edward Kemp and Starkville Police Chief Mark Ballard agreed to address the issue. Kemp said the area in question would be a good point of data collection for the regional transportation study the city is currently undergoing, and Mayor Lynn Spruill said it might be a good location for a radar sign monitoring the speed of traffic.

Ballard said SPD will be sure to enforce the law against excessive noise from vehicles, which he called a "fashion statement" from some cars in particular.

Additionally, the board voted unanimously via the consent agenda to suspend the city's recycling program, which operated at a loss, in order to save money after the COVID-19 pandemic created a budget shortfall of more than $1 million.

The city is considering a partnership with MSU's "robust" recycling program, Sistrunk said, in order to keep providing the service to citizens at a manageable cost.