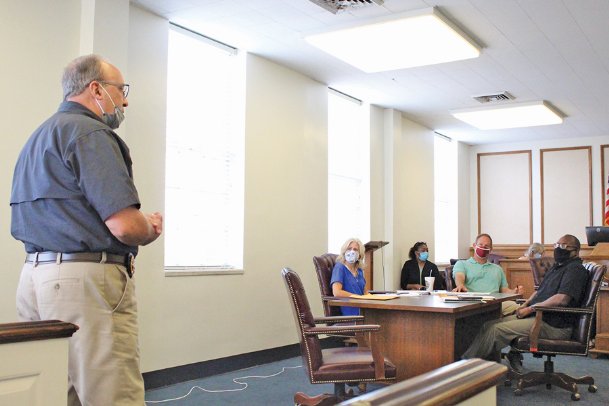 Oktibbeha County Sheriff Steve Gladney, left, asks the board of supervisors Tuesday to consider a curfew in order to prevent large gatherings, since the county has seen several parties, including block parties, in recent weeks despite the ongoing COVID-19 pandemic. The board enacted a curfew from midnight to 4 a.m. and will consider extending it at the next meeting on Monday. Photo by: Tess Vrbin/Dispatch Staff

Supervisors unanimously approved a curfew that started Tuesday, from midnight to 4 a.m., in Oktibbeha County until at least Monday, after the sheriff's department expressed concerns about large parties in recent weeks as the COVID-19 pandemic continues.

Sheriff Steve Gladney said there have been several block parties, which Oktibbeha County Sheriff's Office has never had to deal with before.

"We're having 100 people show up to these block parties," Gladney said. "We had one Friday night on Hickory Grove (Road), and we always get calls that the street is blocked and there's loud music and we have to go out there and deal with them. There's one planned for this Friday."

Breaking up a party always results in the group reconvening somewhere else in the county, he said.

The supervisors will revisit the curfew Monday at its second meeting of the month, which will include a public hearing for the Fiscal Year 2021 budget.

District 2 Supervisor Orlando Trainer suggested the curfew start at 10 p.m., but Gladney said that timing might interfere with Starkville High School football games on some Fridays, and the parties tend not to start until after midnight anyway.

District 4 Supervisor Bricklee Miller said she did not think the entire county should be punished for a few people's actions, but all five supervisors voted for the curfew.

The resolution did not include a specific penalty for breaking the curfew.

The supervisors previously enacted a curfew in early April, from 10 p.m. to 5 a.m., and lifted it in mid-May. Lowndes and Clay counties, as well as the cities of Starkville and Columbus, had their own curfews at the same time.

The board also voted unanimously for County Administrator Emily Garrard and Board Attorney Rob Roberson to get in touch with the Mississippi Department of Environmental Quality to be certain of the rules and regulations for clearing out debris from creeks.

Flooding and drainage issues have been a priority for all the supervisors due to heavy rains over the past several months. The board agreed in May that Hollis Creek, which is in Districts 4 and 5, is a serious problem due to the buildup of debris and subsequent flooding of residential areas in southern Starkville and Oktibbeha County.

The supervisors voted 3-2 in May to join the Tombigbee River Valley Water Management District, and they agreed Tuesday that they hope to work closely with the district once they are certain of MDEQ's regulations.

The Tupelo-based state agency does flood control, cleanup and repair projects on waterways of all sizes in 13 northeast Mississippi counties, and membership costs $133,000 per year.

Miller and Board President John Montgomery of District 1 both voted against joining the agency out of concern that it would take workers too long to get to the county's drainage projects while working in 12 other counties. Both repeated their concerns Tuesday.

"My argument was that we would be faced with things like this," Montgomery said. "Quite honestly, they're not going to be able to get to (Hollis Creek) in time to prevent, in the near future, flooding, damage, et cetera."

He and District 5 Supervisor Joe Williams agreed that the agency should "earn the money" the county decided to pay for membership.

David Kennard, executive director of the water management district, told the board in June that the agency completes multiple projects per year in each county, rotating from north to south and working on the projects each county deems most important.

The board and the governor will each appoint a member representing Oktibbeha County to the water management district board. Property taxes fund the services, and the county does not need to increase millage rates in order to receive them.

County Fire Services Coordinator Patrick Warner said the price of a fire truck increases by 5 to 6 percent every year, so the county will save money buying two trucks now instead of one now and one next year as initially planned.

The county bought a new truck for the Sturgis Volunteer Fire Department in February for about $307,000. A new truck for the Maben VFD costs about $319,000, and the county would spend about $341,000 on another truck by waiting several months, Warner said.