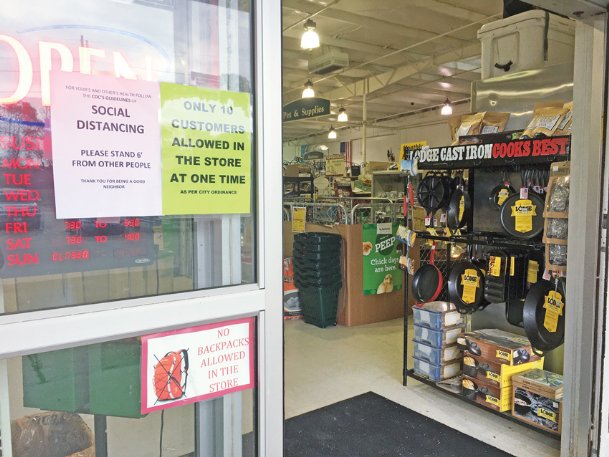 Signs outside the Oktibbeha County Co-op in Starkville denote city laws regarding gatherings due to the COVID-19 coronavirus pandemic. City aldermen banned gatherings of more than 10 people Friday, so the co-op handed out pieces of paper numbered 1 to 10 to customers to limit the amount of people in the store. Photo by: Theo DeRosa/Dispatch Staff

The jewelry counter at AAA Jewelry and Loan in Starkville sits dark and empty on Tuesday afternoon, with the TVs behind the counter turned off. Starting the week of March 9, the store has kept its doors locked to customers unless they're paying money on their pawns, trying to limit the spread of the COVID-19 coronavirus.
Photo by: Theo DeRosa/Dispatch Staff

Now in its 85th year of operation, the Lowndes Farm Supply has been there "through good times and bad times," General Manager Jeff Hays said.

But Hays has never seen a time like this.

Due to the ongoing COVID-19 coronavirus pandemic, the city of Columbus and Lowndes County closed many businesses, while other businesses have directed employees to work from home. That means county residents have more time than ever to spend in their yards, and customers have flocked to the farm supply in greater numbers, mainly stocking up on livestock feed, pet feed, garden seeds and plants.

"I think they don't know what might happen to the supply chain," Hays said, an ominous prediction that a prolonged pandemic crisis could make goods less available.

While Hays said the increased sales are due to "just a slight bump in what the normal person would buy," he said traffic in the store is up nearly 40 percent from March 2019. The business hasn't cut its hours at all; in fact, it has had to add two employees to deal with the rush.

Hays' store isn't the only example of a Golden Triangle business flourishing in the face of the current pandemic. Despite social distancing measures and limited in-person shopping, co-ops, pawn shops and liquor stores in Columbus and Starkville have continued to thrive.

Sales are up at Gary's Pawn and Gun on Highway 45 in Columbus, and the store has seen more first-time buyers in the past two weeks than ever, owner Gary Dedeaux said.

Handguns and 9-millimeter ammunition are flying off the shelves as people seek self-defense in what Dedeaux called a "new environment" that "no one has been in" before.

Starting March 9, AAA Jewelry and Loan in Starkville locked its doors to customers unless they're paying money on their pawns or have a specific order for ammunition. Despite the limit of two boxes per person, the store is running low on handgun ammunition and can't reorder because its manufacturer is out of stock.

Other local businesses have implemented measures like AAA's locked-door policy in an aim to slow the spread of the virus. At the Oktibbeha County Co-op in Starkville, only 10 customers are allowed in at once as the store attempts to comply with Centers for Disease Control and Prevention policy to limit gatherings to 10 or fewer people. A sign outside the front door warns patrons to stay six or more feet apart to encourage social distancing.

Marilyn Laird Henley of Starkville, who came to the co-op Tuesday afternoon to buy rose food, said she's noticed fewer people outside and less traffic on the roads. Her visit was part of an effort to make all her errands in a single trip: going to the bank, dropping something off at the post office and bringing some money to her church.

"We used to go every day and go someplace different and stay out all the time, but we can't do that right now to be safe," she said.

With plenty of frozen food and canned goods at home already, she said she's "not as bad off as some people might have been," but she also picked up extra milk, juice, bread, eggs and other perishables at Kroger.

"I think we all have gotten some extra things," she said.

"What we've noticed the most is the way people shop," Campbell said. "It's 'give me a case of that,' instead of a bottle. I guess they plan on self-quarantining until this is over. I had one gentleman buy six half-gallons of gin and 21 liters of tonic, and he says, 'I'll see y'all in a couple or three months.' That's kind of the mentality that's going on."

Campbell expects to see an uptick from the forced closures of bars in the area, but he said it's "hard to gauge how much" with a lot of bar business related to restaurants -- which can still continue to operate via drive-through, takeout and delivery.

Scott Gault, owner of Scotty's Wine and Spirits on Highway 12 in Starkville, said his business, which had a huge February and is following up with a solid March, is on pace to beat last year's sales numbers.

The store, which displays a table full of bottles of hand sanitizer front and center, now closes at 6:30 p.m. instead of 9 p.m. from Monday through Thursday and at 8 p.m. rather than 10 p.m. Friday and Saturday. But the reduction in hours hasn't impacted a booming business.

"Sales are like a football game weekend in the fall, unlike March normally," Gault said.