Leach starts MSU tenure by crediting coaches before him 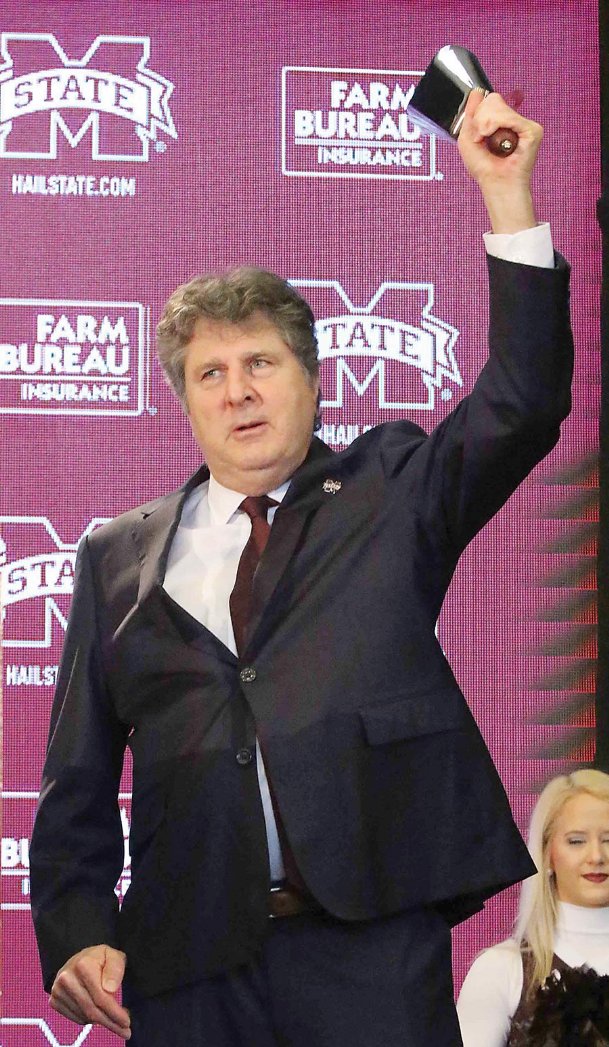 Mike Leach rings a cowbell at the end of the press conference introducing him as the 34th head football coach at Mississippi State on Friday in Starkville. Photo by: Jim Lytle/Special to the Dispatch 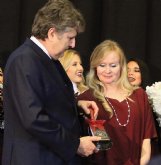 Mike Leach shows his wife Sharon their new cowbell after the press conference introducing him as Mississippi State's 34th head football coach on Friday.
Photo by: Jim Lytle/Special to the Dispatch 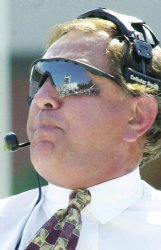 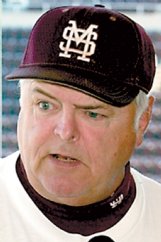 STARKVILLE -- Seated to the right of the stage at the Leo Seal Jr. Football Complex Friday, the base of Mike Leach's maroon tie poked through the fastened button in the middle of his chest.

Emblazoned on the freshly fitted tie, a stitched look-alike of Mississippi State's famed bulldog mascot Jak -- the real version of whom looked on just a few feet away, yanking at his leash -- peered out toward the roughly 500 gathered fans in a space that normally serves as the football team cafeteria.

In Sherrill's case, the pair's friendship dates back to Leach's days as the offensive coordinator at Kentucky, when Sherrill was in the midst of winning MSU's lone SEC West Division title in 1998.

"Coach Sherrill was a guy that, when I was a young coach, kind of took me under his wing and told me about this great place, and of course, I was jealous," Leach said.

As for Polk, Leach -- a former high school baseball coach himself -- has twice read his baseball bible "The Baseball Playbook" and has applied the intricate coaching techniques to his own work on the gridiron.

"I first started coaching baseball at age 15 -- so, when I got to college my first year, the textbook was 'Baseball Playbook' by Ron Polk," he said. "It looked like a great big term paper with the brass things through the deal. I still have that book."

And while Leach's relationships with Sherrill and Polk vary, the latest addition to the MSU coaching fraternity is wholly cognizant of the men who laid the foundation for what he hopes will be future success in Starkville.

"I've always really valued that relationship because I have a lot of admiration for the older coaches and what they've brought to the game and what I've had the opportunity to learn from them," Leach said in reference to Sherrill. "They're the guys that, one day, made me excited to be a coach."

Though they never served on the same staff, Leach and Sherrill have long been connected.

Fresh off guiding MSU to its first and only Cotton Bowl appearance in 1998, Sherrill met Leach at a conference and invited him up to his hospitality suite.

"I was flattered," Leach said.

Sherrill was immediately impressed with Leach's intelligence as the pair discussed offensive philosophies.

"It's one of those things when you meet young coaches: You either have a connection or you don't -- and there was a connection," Sherrill told The Dispatch. "There's no question he was one of the brightest young coaches coming up. If I'd been smart, I'd have hired him."

Following the convention, the pair stayed in touch.

During Leach's 10-year run as the head coach at Texas Tech -- where he compiled an 84-43 record at a school that boasts an overall winning percentage of just .553 -- Sherrill visited the school to put on a kicking seminar toward the end of his tenure.

Sherrill is also keenly aware of the challenges college football outposts like Pullman, Washington, and Starkville pose. He's a former head coach at Washington State, guiding the Cougars to a 3-8 record in 1976 before landing the head coaching job at Pittsburgh.

A bond based in books

While Polk has never met Leach, he's well aware of The Pirate's exploits.

The 54-year coaching veteran read Leach's book, "Swing Your Sword: Leading the Charge in Football and Life" a few years back.

Intrigued with his weaving of pirate philosophies and their applications to football, Polk came away impressed with Leach's work.

"I read his book after he left Texas Tech and went to Washington State and enjoyed it," Polk told The Dispatch.

Though Leach and Polk's relationship to this point is one purely based on admiration for one another's writing, the latter has been close with MSU football coaches through the years.

Before the construction of the Bryan Building and, ultimately, the Seal Complex, much of the MSU athletic department was housed in Humphrey Coliseum. Situated in an office amongst the football staff, Polk quickly endeared himself to Sherrill and to other former MSU coaches Bob Tyler, Emory Bullard, Rockey Felker and Sylvester Croom.

"I've been through a lot of coaches there, my gosh," Polk quipped.

Speaking with Polk in the wake of Leach's signing, Cohen made note that his latest hire wanted to meet the College Baseball Hall of Famer.

"The new football coach?" Polk responded puzzled. "I don't even know him."

"Yeah, he asked for you," Cohen responded. "He liked your book."

Preparing to leave his current home in Birmingham, Alabama -- where he serves as an assistant coach at the University of Alabama-Birmingham -- to Atlanta for a speaking engagement at the time, Polk was unable to fulfill the request -- though he hopes to in the coming days. Leach does, too.

"I can tell you right now that Polk wrote a great book," Leach said Friday. "There are some minds, in whatever interests they're in, that are just outstanding. Anytime people are pursuing knowledge and thought, a lot of good things come out of it generally."

A nod to the past

Nearing the end of an over-35-minute debut in which he fielded questions ranging from recruiting philosophies to whether he would bring his class on insurgent warfare and football that he previously taught at Washington State to MSU, Leach closed his speech in the same manner he began it -- with an ode to the past culture in Starkville.

"I've always admired Mississippi State and their traditions," he said. "I don't know how to describe it. There's a unique independence that exists with Mississippi State that doesn't exist other places. They are very direct, very down to earth and independent in the way they do their stuff. Everyone is not running around in their linen suits even when it's their casual time. There's a gritty toughness here too that I think exists and allows achievement and people to get things done."

It's been roughly 20 years since Sherrill and Leach's ever-growing bond began in a hospitality suite at a convention. Polk's connection to the new coach remains founded in literature, but stands to grow.

And while Leach's relationships with the legends of MSU's past athletic successes continue to flourish, it's the former Washington State and Texas Tech coach who is now garnering the praises of his predecessors.

"I think it's great that Mike Leach has tried to identify with people that have been at Mississippi State for a long time and had some success," Polk said. "And I think that's a good thing on his part to say that."