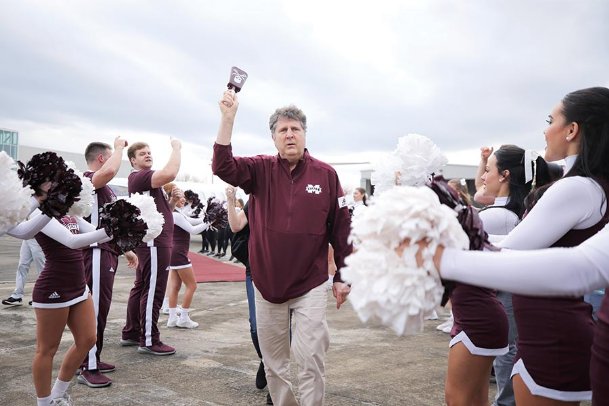 Mike Leach rings a cowbell for fans Thursday at George M. Bryan Airport in Starkville during a welcome ceremony for the newly-hired Mississippi State head football coach. The pirate emblem on the bell is an ode to Leach's love for pirate lore. Leach replaces Joe Moorhead, who was fired after only two seasons leading the Bulldogs. Photo by: Courtesy photo/Aaron Cornia/MSU Athletics

Held off the tarmac by a spiked black fence, droves of MSU fans surrounded the airstrip where Leach first landed as the man tasked with coaching a program reeling from a disappointing 6-7 season that was marred by more off-the-field problems than successes on it.

"First beer is on me!" one fan yelled.

As the door to the plane flung open, Leach and his wife, Sharon, stepped onto a maroon carpet as the new coach clanged a personalized cowbell bearing a pirate skull for all to hear.

Leach, who is oft-referred to as 'The Pirate' for his staunch interest in pirate lore, was personally greeted by MSU's Bully mascot -- who added an eye-patch to his usual getup of football pants and a jersey.

An 18-year head coaching veteran who combined for a 139-90 record between stops at Washington State and Texas Tech, Leach was welcomed by fans across Starkville with generally open arms Thursday as a six-day search for Joe Moorhead's replacement culminated at George M. Bryan Airport.

"I'm excited," Luanne Mashburn, a 1983 MSU graduate, told The Dispatch. "I've followed Mike Leach for years from his time at other places and I think he'll bring a brand of excitement we'll see on the field that'll be great."

While Leach's hiring was made official at 2 p.m. Thursday, the news continued to spread across town into the early evening.

Perched on a railing outside Bin 612, MSU senior Olivia Benner offered her thoughts on the school's decision to make a new coaching hire.

"It's definitely a mood booster," Benner said. "When the school is happy about sports, they're really happy; and when they're not, they're really not. So I think (hiring a new coach) is a huge advantage just going forward with the fanbase."

At Moe's Original BBQ on East Main Street, Christopher Walrath sat at the bar with a full whiskey glass to his right as the blaring analysis of late-afternoon sports talk shows emanated from the televisions before him.

A Starkville High School graduate, Walrath, 46, has long been in tune with MSU's football program. Originally from Pittsburgh, Pennsylvania, he sympathized with Moorhead -- a Pittsburgh-area native himself. But as poor on-field results coupled with off-the-field issues -- most notably the academic misconduct scandal in which a tutor completed coursework for 10 football players and a fight between junior linebacker Willie Gay Jr. and freshman starting quarterback Garrett Shrader left Shrader unable to play in the Music City Bowl -- he was OK with the change.

"The problem is: how many great defenders or defenses have come out of the PAC-12?" he said. "Almost every game is 48-37. Moorhead wanted to have a 65 percent (pass) completion percentage, but when you're playing Alabama and LSU and Auburn, especially this year, you have to have a defense like we did in Moorhead's first year."

"I don't know how his air attack differs from Coach Moorhead," Bobby Wilson, a December 1974 MSU graduate, added. "So that's going to be interesting to see the difference in the two if there is a difference there."

'We will win the press conference every day'

While Leach's schemes have their detractors, the hiring was met with an overwhelmingly optimistic tone at the airfield. Never one to mince words, the former Washington State and Texas Tech coach has earned a reputation for his outspokenness in postgame press conferences, both good and bad.

Of note, he was unceremoniously fired at Texas Tech in 2009 following accusations of player mistreatment that Leach continues to deny, while more recently he called his players "fat, dumb, happy and entitled" after his Washington State team fell 38-13 to Utah on Sept. 28.

"We will win the press conference every day," Mashburn said. "I think he's entertaining and he's got personality that you don't always get with football coaches. He'll call out his players, he'll call out his coaches and you don't often see that."

Once on the tarmac, Leach greeted several current players -- including Shrader, junior running back and Columbus native Kylin Hill and freshman cornerback Jarrian Jones. After a brief exchange, in which Jones quipped Leach needed to ditch his plain black New Balance shoes for a pair of his rainbow-colored Adidas Yeezy's, Leach made his way around the fence -- shaking hands and signing autographs with each ensuing step.

After a nearly 20-minute trek across the lot, Leach boarded a black SUV and exited the airport. Behind him, Cohen too was greeted by handshakes from enthusiastic fans.

"I think the fanbase is glad it's all over," Wilson said. "I think you've got to put your faith and trust in John -- he's done a great job. He knows more than any of us will ever know about who was there and who was the No. 1 (choice) or No. 3 (choice) -- this guy may have been the No. 1 choice. John's done a super job, so we trust that he got the best (coach) for us."

"I think last year we had higher expectations and it was very disappointing and we just need to build back up," J.B. Shank, a 22-year old senior at MSU added. "And when we build back up with a year or two or maybe a few, I think coach (Leach) can do this for us."