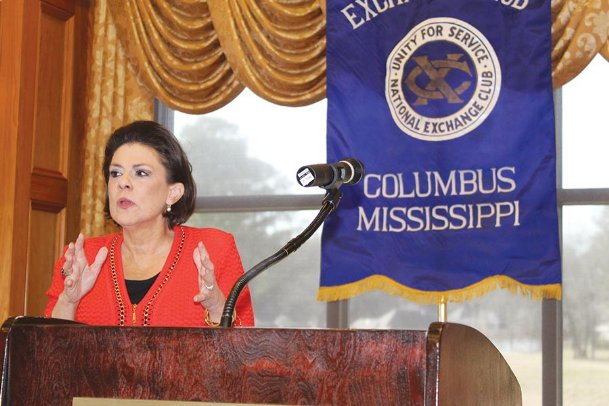 Preservation Society of Columbus board member Kathy Novotny outlines the PSC's origin story and goals at the Columbus Exchange Club on Thursday. Columbus Pilgrimage Tour homeowners voted unanimously to form the PSC and hopes to take over operation of the annual Pilgrimage in 2021, but the group is still trying to get an audience with the Columbus Cultural Heritage Foundation to decide who will run it this year. Photo by: Tess Vrbin/Dispatch Staff

Kathy Novotny is fine with being known as the woman who lives in Dixie Butler's house.

Novotny was inspired to buy Temple Heights, an antebellum home on Ninth Street North in Columbus, after she restored a home she inherited in Woodville, she said at Thursday's Columbus Exchange Club meeting at Lion Hills Center. Butler wanted the next owners of her house to keep it open to the public as an educational opportunity.

"I am so thankful that she did, because it has been the most rewarding thing that we've done," Novotny said.

Novotny and other Columbus Spring Pilgrimage Tour homeowners formed the Preservation Society of Columbus in September, hoping to take over the Pilgrimage from the Columbus-Lowndes Convention and Visitors Bureau and the Columbus Cultural Heritage Foundation. A private nonprofit funded through CCHF, the Pilgrimage began in 1940 and is an annual tour of pre-Civil War homes and churches held over several days in late March.

PSC sent a letter to CVB and CCHF asking to be allowed to help stage the 2020 Pilgrimage, then assume full responsibility for the event in 2021. The letter also asked that CVB turn over $117,000 annually -- the amount CVB provided to CCHF for the 2016 Pilgrimage, based on CCHF's 2016 tax documents.

CCHF voted in October to hand over operational control of Pilgrimage immediately and noted that there were no additional CCHF funds available to provide to PSC. However, PSC did not ask for additional funds, Novotny told The Dispatch -- only for CCHF to transfer the $117,000 it received from CVB.

PSC is still trying to get an audience with CCHF to determine who is going to run the Pilgrimage this year, Novotny said. She detailed the organization's brief history and how the members believe it will benefit Columbus, both culturally and economically.

The seeds of PSC were planted when Beth Miller, the head of the interior design department at Mississippi State University, created a program for a master's degree in preservation, the first of its kind in the state. Her idea was for historic homeowners in Columbus to allow MSU students in the master's program to use their homes and neighborhoods as a lab, where they could help people place their homes on historic registers and educate them about the benefits of preservation, Novotny said.

Novotny decided to educate herself on preservation so she could recruit Pilgrimage homeowners at Miller's request, and she found Natchez to be a perfect example of how historic preservation can drive a city's economy. Tourism is the primary industry in the city of about 16,000 people, and the Historic Natchez Foundation has more than $7.5 million in assets, she said. Other civic organizations amassed their own millions that contribute to preservation.

"We found millions of dollars that we're not doing, that we could be doing," Novotny said.

The Pilgrimage homeowners looked into grants and other fundraising options before voting unanimously to form PSC, which aims to hold heritage and cultural events in addition to historic home tours, she said.

"Our mission statement is to conserve and preserve buildings and places that include all cultures, all neighborhoods, all memories that define our past, present and future, and we're going to do this through storytelling, advocacy and education," Novotny said.

She restored her Woodville house with tax credits, and she said she was surprised to learn during her research that the majority of those tax credits go to low-income areas. A house has to produce income if an owner uses the tax credits to restore it, she said.

PSC wants to preserve more than just pre-Civil War homes like Temple Heights -- Columbus has a variety of old homes from small cottages to larger Victorian houses and "mid-century modern" houses, and all are worth preserving, Novotny said.

"Preservation in my mind was always antebellum, but that's not what preservation is," she said. "Preservation is of the past, and one curator at the Smithsonian defines the past as what happened yesterday."

'The sleeping beauty of the South'

Novotny supplemented her talk with a story about a woman finding an ogre repeatedly throwing babies into a river and screaming for help from the community to stop it.

"She's our community organizer," she said. "She impacted her community by saving those babies. But when they went upstream to see what was happening, it takes courage. The moral of this story, and the symbolic part for us, is that those babies floating down the river are our economic development dollars, our tax dollars, our social impact dollars. We have to go upriver and find why we're not getting those."

The PSC's community organization efforts had strong start with a recent membership drive and gala at the Riverview Mansion that raised $40,000 -- $30,000 in cash and $10,000 in in-kind donations, Novotny said. The nonprofit will use the money to create an online database of Columbus' historic homes, tracking donors, tax credits, which homes are being renovated and for how much money, among other things.

PSC is planning a second, Disney-themed fundraiser at the house across the street from Temple Heights once occupied by Josh Meador, a Disney animator and an impressionist landscape painter, Novotny said.

She said Natchez is proof that a city can survive on tourism alone and gives Columbus an incentive to build on the history and educational opportunities it has to offer.

"Our town is different from most other towns in at least North Mississippi," Novotny said. "We are considered the sleeping beauty of the South."