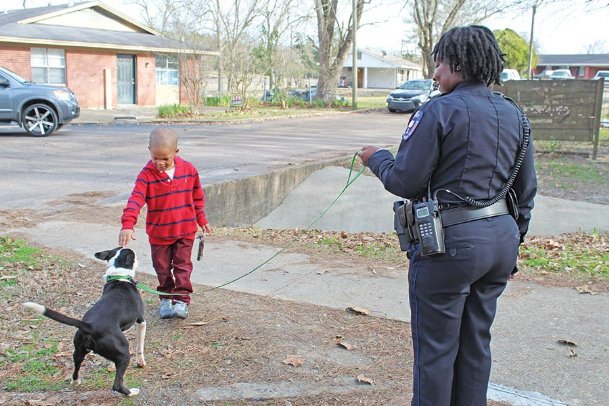 STARKVILLE -- A group of children flocked from the school bus to the police officer and the dog on a leash at Brookville Garden Apartments Thursday afternoon.

Most of them focused on Star Gazer, a friendly black-and-white pit bull mix, but one child asked Community Relations Officer Angelica Colbert, "Who's getting arrested?"

Colbert replied that no one was.

"They're used to somebody getting arrested any time one of us is out here, so we try to get out here on foot as much as we can," Colbert told The Dispatch. "We're not here to arrest somebody. We're just here to talk and hang out."

Community relations police are responsible for interacting with the public every day rather than keeping an eye out for trouble, she said. One way the division connects with people is to ride around on Segways and hand out popsicles during the summer. More recently officers have partnered with the Oktibbeha County Humane Society's Dog's Day Out program.

The program, which began in November, allows anyone to pick up a dog for a few hours and take it on a walk or another outing. Colbert took a brown pit bull named Lola around town with her on Wednesday, from police headquarters to Main Street and a few neighborhoods, she said.

"Lola isn't your typical law enforcement canine, so (people thought), 'What's an officer doing with a pit bull?'" Colbert said. "She was really sweet and she would work well in any home."

Dog's Day Out "has worked wonderfully" in helping the shelter dogs get adopted, OCHS director Sarah Akins said. It also helps socialize the animals before they find new homes.

"Star Gazer was very timid and very scared when he first got here, and he's come out of his shell a whole lot," said Akins, who was an animal control officer with SPD for 12 years before she joined OCHS in July 2019.

Community relations is not the only division of SPD that has participated in Dog's Day Out. Two animal control officers, Vittoria Hammer and Brandy Johnson, spent a few hours with an elderly dog named Gracie in December to promote SPD's "angel tree" supply drive for OCHS, according to a Facebook post.

"Several will not hesitate to put an animal in their car and bring them up here just to make sure that they're safe," she said.

Colbert is a self-described "huge dog person" and has two canines of her own, 2-year-old labrador-beagle mixes named Yogi and Kuma, as well as a cat and a guinea pig.

"(The dogs) don't like it when I get home because they smell this other dog all over me," Colbert said with a laugh.

The kids at Brookville Garden, on the other hand, surrounded Star Gazer to pet him and asked Colbert questions about him, like what breed he was and if he was a police dog.

Before the bus arrived, Colbert and fellow officer Kenya Bibbs walked the length of the complex with Star Gazer and greeted the residents that were out and about, some of whom they knew.

Colbert stopped to chat with two young men playing basketball and three more who were leaning against a car. She encouraged one of the latter group to consider adopting a dog.

"You'd have some responsibility and it'd give you something to do," she said.

After meeting the children that got off the bus, Star Gazer jumped into the front seat of Colbert's car, which sometimes resulted in him pressing buttons, Colbert said.

"On the way over here, I didn't know he had pressed a button on my radio, and I'm wondering why these cars are being weird in front of me, and it's because they thought I was going to pull them over," she said.

She drove them a few blocks to Henderson Street, where they met with Community Relations Lt. William Durr before Colbert took the dog back to OCHS.

Durr said he expected people to be more receptive to an officer walking an adoptable dog.

"The walls people have up, it disarms those and helps us get to know people better," Durr said.