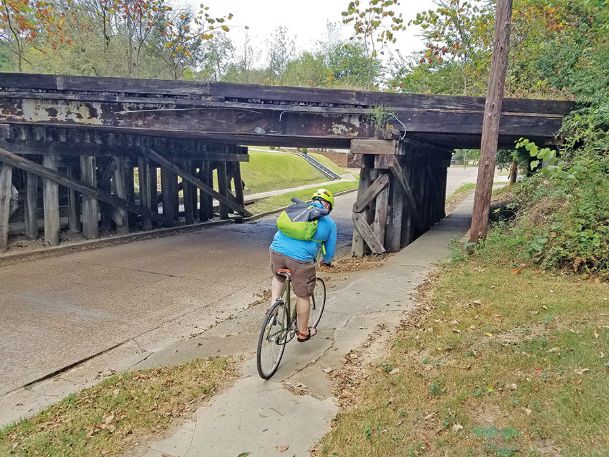 Christopher Ellzey bikes toward the bridge where the railroad crosses Washington Street, where he lives. Ellzey said he would consider using the railroad tracks to bike to and from the Mississippi State University campus, where he is a graduate student, if the city succeeds in turning the rails into a trail. Photo by: Tess Vrbin/Dispatch Staff

STARKVILLE -- The railroad that bisects Starkville from southwest to northeast is part of Johnny Buckner's heritage.

His house on Washington Street near the bridge with the tracks has been his home for most of his life. Before trains stopped using the tracks, his children and their grandmother would stand nearby when a train was coming and wave at the conductor, hoping to get a wave back.

Now the city wants to turn the tracks into a biking and walking trail, and it could be "the most-used thing in Starkville," Buckner said.

The trail would be part of the national network created by the nonprofit Rails-to-Trails Conservancy, the nation's largest trail organization, according to its website. Mississippi has 15 RTC trails, including the Columbus Riverwalk, the Kitty Bryan Dill Memorial Walkway in West Point and Tanglefoot Trail, which stretches 43.6 miles from Houston to New Albany.

Starkville aldermen voted unanimously Tuesday to ask permission from the federal Surface Transportation Board to work with Kansas City Southern, the company that owns the railroad, to remove the rails and turn the route into a trail. The railroad runs from Ackerman to West Point and has not been used in several years.

Mayor Lynn Spruill said funding for the project would come from grants, and she recently met with representatives from Clay and Choctaw counties to discuss creating a district to appeal to the Surface Transportation Board.

"Just doing it in Starkville might not be something we could get the board to be supportive of because it's just that little segment, but if we start the ball rolling, perhaps we can get the rest of them on board and go forward with a regional approach," Spruill said.

KCS has not yet indicated support for the project, and the city hopes to negotiate so that the company would still hold the easement over the land in case it decides to use it for rail transport again in the future.

Spruill said the path would be "huge" and "transformative" for Starkville.

"As we're trying to become more pedestrian and bike-friendly, (the trail) would allow an entire corridor of places where people could bike not just as recreation -- although it would certainly be that -- but as transportation to get to work," she said. "It cuts right through the middle of Starkville."

Christopher Ellzey rents one of Buckner's properties on Washington Street and bikes in the neighborhood twice a week. Locals already use the railroad as a biking and walking path regularly, he said.

"It's already being repurposed that way and I think making it easier to walk on will only heighten that," Ellzey said. "It's already established as a convenient thoroughfare for pedestrian traffic."

Those pedestrians include Ethan and Melia Grant, who moved to Washington Street a few months ago.

"We both enjoy walking up and down that railroad," Ethan Grant said. "I'll walk up and down reading and praying, or going on a walk with my wife."

If the trail becomes a reality, the project should include raising the bridge over Washington Street so trucks will no longer try and fail to drive underneath it, Grant and Buckner both said.

The central part of town is not the only neighborhood putting the railroad tracks to use. Samuel Bond and Allen Ashworth both live northeast of Highway 182 and said they sometimes walk on the tracks just outside their houses. Bond walks his dogs along the tracks and will continue to do so if it becomes a trail, he said.

The 3.75-mile Kitty Bryan Dill Memorial Walkway was one of the first members of the RTC network, which began in 1986, and was named a National Recreation Trail in 2005 by the U.S. Department of Interior.

Gazebos, benches, birdhouse and a miniature Statue of Liberty are dispersed throughout the path, said Lisa Klutts, director for West Point Main Street.

"It would be incredible (if) we were able to tap into some of the heritage of the past," Buckner said.

Unlike the potential trail in Starkville, the Kitty Bryan Dill Memorial Walkway is not a commuter trail, and the only bikers on it are children, Klutts said.

Bond said he might bike to and from Starkville High School, where he teaches biology, and Ellzey said he could use the trail to get to the Mississippi State University campus, where he is a second-year graduate student.

The railroad runs right next to several businesses on Highway 12 on the southwest side of town, including Shoe Dept., where sales associate Issabella Hall said she would take advantage of the trail.

"It would be better for me (physically), most of the time it's alright weather here, I would enjoy it a lot more and I would save a whole bunch of money on gas," Hall said.

Although the railroad tracks are near and dear to Buckner's heart, he said turning it into a trail is "a great idea."

"It's just such a natural beauty," he said. "I was a distance runner in high school and used to have to run on Montgomery Street, all the way to the country club. If I had had a track (nearby) to run distance, that would have been so much fun."