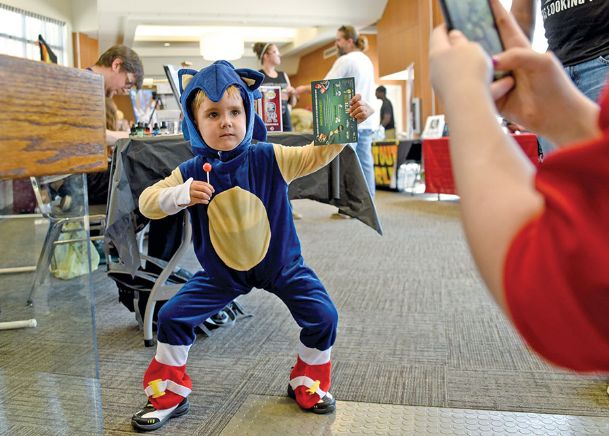 Mariano Nicieza has been in the comic book industry about 30 years, has worked for Marvel and with comic legends like Stan Lee, and earlier this year was a guest at San Diego Comic Con, one of the world's biggest pop culture convention that attracts thousands of visitors every year.

And next weekend, Nicieza will be in Lowndes County for the fourth annual Golden Triangle Comic Con -- a significantly smaller convention, but one which Nicieza says he's looking forward to. He always loves visiting smaller conventions throughout the country, he said.

"There's a personal satisfaction to reaching out to audiences and fans that don't have the opportunity to go to (bigger conventions)," he said.

Nicieza is one of several guests who will be in attendance at the event Sept. 14-15 at the Communiversity on East Mississippi Community College's Mayhew campus. He and comic writer and editor Tom DeFalco will meet with and sign autographs for convention attendees at a special VIP dinner Saturday night. Other guests include comic artists Geoffrey Gwin and Mitch Ballard, as well as artists and cosplayers (individuals who dress as fictional characters) from around the country.

Brandon Sesser, EMCC's director of information systems technology and organizer of the convention, said while many of the guests are from the comics industry, the convention is going to focus on far more aspects of pop culture and technology -- especially given that it's one of the first major events at the newly opened Communiversity. The event will feature more than 65 vendors of toys, comics, costumes and more, along with video game and cosplay competitions and a "children's con" set aside especially for kids, Sesser said.

"We are ... going to have a lot of different panels this year," he said. "Not only just art, but we're also going to have a few instructors that will have panels talking about community projects and the way to grow our Golden Triangle area."

Breaking into the industry

Comics hold a special meaning for Nicieza, who emigrated to the United States from Argentina when he was 8 years old.

"Spanish was our native language," he said. "I could count on one hand how many English words I knew, and they were 'OK' and 'no.' Comic books literally helped me learn English."

He and his brother Fabian Nicieza, who is a writer and co-creator of the comic series "Deadpool," both began working for Marvel in the 1990s, with Fabian focusing on the writing and marketing side of the industry, and Mariano gravitating toward art and design -- along with a love for conventions and trade shows. He later left Marvel and started his own company, Apex Comics Group, but still regularly attends conventions.

At many of those conventions, he takes a look at aspiring comic artists' work, which he intends to do next weekend.

"There aren't many ways to break into the comic book industry," he said, adding it was an "insular" industry requiring very specific technical skills.

"Unless you have the skillsets to adapt a written plot to a visual medium like that, you'll never make it in the comic industry," he said.

That's what he wants to help artists with this weekend.

"If I can help someone break into the industry, I will feel I've fulfilled a mission," he said.

Sesser said artists can sign up to show their work to Nicieza on the convention's website, and that several artists are coming from out of state to do so.

"Mariano, with his artistry and his writing, and the fact that he has worked with Stan Lee, William Shatner, is just amazing," Sesser said. "Every year has been a fun time, not only for me, but for our students that go and help, for the panel, the people who come in to speak. They are just enthralled with the amount of energy, enthusiasm, that happens at these events."

Nicieza will also help choose between several area nonprofits to receive 10 percent of profits from the event, Sesser said. In the past, the convention has donated funds to the Boys and Girls Club of the Golden Triangle and to Palmer Home for Children.

"That's one of the reasons GT Comic Con is such a successful event," he said. "Because they are wanting to give back to the community and be able to establish a larger, more prominent Golden Triangle for everyone."

Sesser has helped organize the convention for the last three years, and says it has "exploded" in that time.

"It just keeps growing, and people are starting to realize that art and technology, those are really high-paying and highly sought-after careers," he said. "So more and more people are getting the bug into artistry and technology."

Last year, the convention -- which was held at Trotter Convention Center in downtown Columbus -- attracted just under 2,000 people. This year, he expects 2,500, he said.

Chris Tarantino, who helped start the first Golden Triangle Comic Con in 2016 with Zac Ashmore, said he's excited about how the event has grown. He began it when he was stationed at Columbus Air Force Base and when it was a one-day event held at the Trotter attracting only a few hundred people.

"We're just happy to see the growth and such events happen and continually develop in Mississippi," he said. "We're also happy to grow our relationship with EMCC. It's not about just comic book stuff, it's about technology and video gaming, and EMCC has a strong computer program."

He said his favorite thing about the con over the years has been interacting with attendees. He said he still remembers the small child who attended dressed as Sonic the Hedgehog in 2017, which is one of his favorite memories. He also liked meeting Super Troopers actor Erik Stolhanske last year.

Even though he's now living in Tennessee while serving with the National Guard, he said he will be back in Columbus next weekend for the con, to see the now familiar faces of families attending.

"You see the parents with their kids," he said. "They look forward to it every year. It's just a great event to connect with people and reconnect with friends and the families that you see that bring their children to the event."

For more information on the con or to buy tickets, go to gtcomiccon.com.

■ HOW MUCH: Tickets are $20 general admission, $12 for children, $15 for military, first responders and students