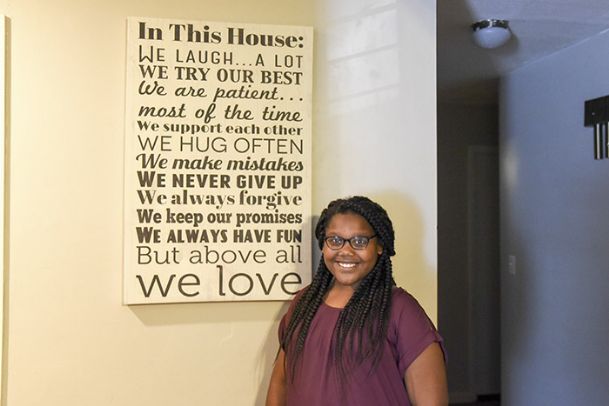 Kori Tate, a fifth grader at New Hope Elementary School, will hold âKoriâs Color Run to Stop Bullyingâ on Saturday at the East Columbus Gym to celebrate her 11th birthday. Kori and her mom, Sonya Fields, have been working on the plans for the event for the past two weeks and hope to have a big turnout for the event, which is free and open to the public. The goal is to raise awareness of bullying by having participants sign pledge cards where they promise not to participate in bullying. Photo by: Deanna Robinson/Dispatch Staff

For Sonya Fields and her four children, birthdays are more about the event than the individual, an approach that has always seemed to resonate especially with her daughter, Kori Tate.

For her 10th birthday, Kori had "movie night" with a big screen set up in the front yard.

This year, Kori said she wanted to do something even more special.

"We started talking about that," Sonya said. "So I asked her what was important to her."

Kori didn't have to think too long.

"I said, 'bullying,' then my mom looked up a color run on the internet and said we could have a color run for bullying (prevention)," she said.

Kori's Color Run to Stop Bullying will be held from 10 a.m.-noon Saturday, the day before Kori's 11th birthday, at the East Columbus gym. It's a free event, open to the public.

Kori is hoping for a big turnout. Instead of raising money, the Kori's Color Run hopes to raise awareness. She is asking for people to fill out pledge cards that say they will not participate in bullying or be a silent bystander. Kori, a fifth-grader at New Hope Elementary School, said she has seen firsthand the effects of bullying.

"I've seen people get bullied at my school, people that were a little different," she said. "There was this one boy at my school, his legs were uneven and somebody was bullying him. I told him to stop, but he wouldn't, so I told the teacher.

"There was another one, a girl," she added. "Nobody wanted to be her friend, so I was her friend, but people kept picking on her."

In the two weeks leading up Saturday's event, Kori and Sonya have been busy planning the event. Kori was given permission to pass out pledge cards at school. They have also gone door-to-door with pledge cards and around town.

"It's sort of snowballed," Sonya said. "Churches, the fire department, businesses. So may people have seen the flyers or on Facebook and asked what can they do."

"We thought, at first, it would just be Kori and some of her friends running around and having fun," Sonya said. "But we've already run out of flyers and so many people have said they want to participate. Honestly, we have no idea how many people will show up. We just say, 'come on!'"

Columbus Mayor Robert Smith has invited Kori to appear at a city council meeting, where she'll present the pledge cards to the city.

People can run or walk the three-mile event Saturday or just show up for moral support.

"And if you don't want to run, we need people to throw the paint," Kori said.

Sonya said Kori's choice for her birthday is particularly poignant this year. Kori's father died unexpectedly in May.

"It's been a tough time for our family," Sonya said. "So, we've been home just trying to get our new normal back. Kori has been just so strong through all of this, helping out here at home, getting good grades and school and helping with her brothers and baby sister. She has the strength of a giant.

"She's going to save us all one day, I think," she added.

2. Reps hope to introduce family dynamics in the classroom AREA