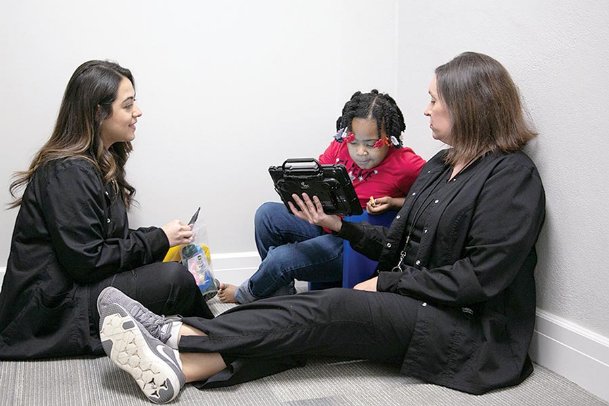 Janette Hreish, Lily Hood and Ashley Alexander use an AAC device during Hood's play-based therapy at The Speech and Hearing Center at The W. Photo by: Photo by Chris Jenkins/University Relations

Six months ago 5-year-old Lily Hood only used a few words to communicate. Now, her words bring tears of joy.

Since June 2017, Lily and her mother, Shan Hood, have visited The Speech and Hearing Center on the campus of Mississippi University for Women twice a week. Each visit, Lily spends time with a team of speech language pathologists who work to build Lily's language and communication skills.

At a young age, Lily was diagnosed with autism. Unable to communicate with words, Lily would become frustrated, cover her face and sometimes just lie on the floor. The task of choosing foods, discovering pain and potty training were difficult for Lily's parents who often relied upon sounds or tugs on the hand.

While visiting the Speech and Hearing Center, Lily participates in play-based therapy. Books, bubbles and balloons are some of the motivating activities used in each session. Through these activities, the speech language pathologists provide communication opportunities for Lily.

In the fall of 2019, during a visit to The Speech and Hearing Center, Lily was introduced to a communication device, augmentative and alternative communication (AAC), that would completely change her life. An evaluation for the device was first recommended by Dr. Kathy Shapley, chair of the Department of Speech-Language Pathology, and performed by Janette Hreish, instructor of speech-language pathology.

"Whatever it is, let's do it," was Shan's reply to the idea. The results have been amazing to Lily's family.

Similar to a tablet, the device displays colorful pictures and word icons. Words like stop, more and go were among the first six words on Lily's AAC device.

Shan said, "And so far I've been completely amazed. I've always said that she's very smart. She's very bright. She may not say a lot but she's constantly watching and then she lets you know that she's watching."

"Her progression has really allowed us to see more of who she is as a person. She is funny, loving and determined. As she has learned to use more words, Lily's world has opened," said Ashley Alexander, speech-language pathologist at The Speech and Hearing Center.

"At one point, if she was hurting, I'd have to guess. I would have to watch for the visual cues. Then one day she made me cry from joy. We were literally turning into the drive for Walmart and Lily said, 'There's Walmart.'"

Her mom said it's the mundane and simple things in life that have been missed. The progression from Lily stating "cookie" to "cookie please" brings hope to the Hood family. "You don't realize what it means until you don't have it," said Shan.

"The AAC device has given us as parents, and hopefully is translating for Lily, that hope of progression. We went from having a handful of words to expanding," said Shan.

Lily will continue receiving speech therapy at The Speech and Hearing Center at The W for the near future.

Shan and her husband, Brian Hood, are residents of Columbus and both graduated from The W. Lily and her family were referred to The Speech and Hearing Center at The W by Baptist Memorial Health Services.