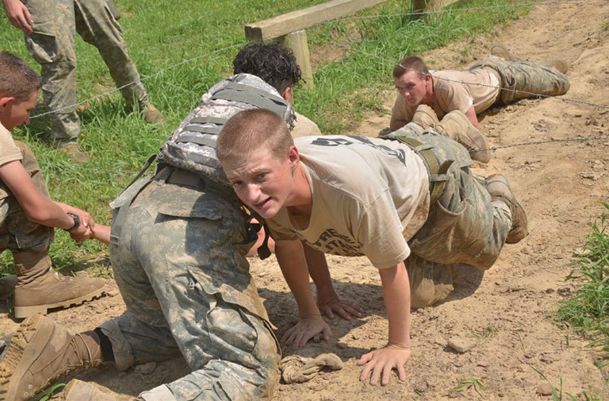 Parker Casano, 14, navigates a physical drill during Camp Liberty's Extreme Military Challenge in Battleground, Alabama, this past July. Casano signed up for the experience because he has an interest in a military career. The Starkville High freshman is the son of Justin and Elizabeth Casano of Oktibbeha County. Photo by: Courtesy photo 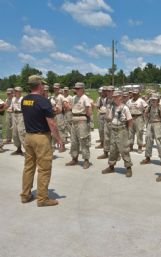 When Starkville High School freshman Parker Casano went off to Camp Liberty in Battleground, Alabama, he didn't expect arts and crafts and archery. He had signed up for the veteran-owned business' Extreme Military Challenge, after all. The 14-year-old son of Justin and Elizabeth Casano of Oktibbeha County has long been interested in a potential military career, inspired by the military service of his grandparents. Camp Liberty seemed a good way to learn more what it might entail. So, Parker joined more than 300 young people ages 13-17 from more than 30 states and 18 countries who made Camp Liberty home as they underwent two to six weeks of military training. It ranged from Cadet Basic Training to Cadet Ranger School to Cadet SCUBA School this past summer, all based on U.S. Army standards. The Extreme Military Challenge is led by a team of military professionals with more than 400 years of collective service.

"I thought it'd be like a camp just giving fundamentals of the army -- not actually like boot camp and everything," Justin told The Dispatch about his four-week immersion in July. From the first moment, however, he knew it would be unlike any experience he'd had before.

"I saw there were actual drill instructors," Parker said. "They told us, 'We are not your friends! We're gonna make y'all work and break you down!'" Parker knew then this was the "real thing." What followed was heads shaved and days and nights of push-ups, sit-ups, exhausting runs, strict discipline, "shark attacks," demanding drills and exacting challenges.

Parker was assigned to third platoon, the "marine division."

"They were the toughest of the tough," he said.

A number of teens dropped out along the way, and Parker had moments when he considered it. But he persevered.

Parker didn't only complete two weeks of boot camp and two weeks of leadership camp, he immediately joined the Starkville High School Junior ROTC program when he returned. His leadership training at the Challenge has already advanced his rank to platoon sergeant. He's also been earning money by mowing yards to return to Camp Liberty next year, for combat medic camp.

"He's at that age where he has to start making some career decisions," said Parker's mother, Elizabeth. "He's all the time talking about being in the military and defending his country. We thought this would help him decide, be as authentic as possible to give him an idea whether he really wanted to or not."

Parker said, "I feel like I have accomplished something that less than 1 percent of kids my age would even attempt because it is really hard, overwhelming and requires a 'don't give up' attitude. I have learned that God has given me an opportunity to see a glimpse of my future that I am really excited about."

Editor's note: Some information in this story is courtesy of a Camp Liberty press release.

Jan Swoope is the Lifestyles Editor for The Commercial Dispatch.

1. A move for migraines: Detective work and a 600-plus mile move unlock a migraine mystery COMMUNITY